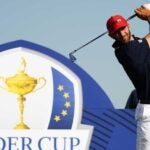 Dustin Johnson, during the 2018 Ryder Cup at at Le Golf National in France.

Steve Stricker, in introducing his six captain’s picks for the U.S. Ryder Cup team, described Harris English as “an older guy,” and the peanut gallery began to chirp.

For those who don’t know, English is an ancient 32.

“I didn’t know that being 32 was considered old these days,” English said.

“Thirty-two is not old,” said Xander Schauffele, another captain’s pick. “I’m happy that 32 is on the ‘older’ side for our team. I think it’s a good time for a younger influx of players and really excited to run with these guys.”

Schauffele was right, and he wasn’t. Thirty-two is not old. (What is, am I right?!) But 32 on the American team that will tee it up beginning Friday at Whistling Straits? A bonafide fossil.

The difference in team age is maybe best described this way: When Westwood played in his first Ryder Cup in 1997, the Americans’ youngest player, Morikawa, was just seven months old. Still, Stricker’s automatic selections were youthful (Johnson, Koepka, Cantlay, Thomas, DeChambeau and Morikawa), then he kept the theme going with his picks. And it wasn’t simply that Stricker, 54, wanted to feel young himself.

“They bring in an excitement level that is unmatched, I think, and they are eager, they are willing to learn, they just want to have that opportunity and they will do anything for that opportunity,” Stricker said. “I see that much in these six guys here as well in that they are just eager to get in there and play and they are excited to be a part of this.

“I’m not saying that veterans aren’t, but they just come here with eyes wide open and ‘put me in, Coach,’ kind of attitude. So it’s refreshing. It’s great to see.”

A look at the U.S. Ryder Cup roster

Collin Morikawa: Morikawa, ranked third in the world, turned professional two years ago — and has five victories, including two major championships. At the Olympics over the summer, he said he hurt his back, but said at the Tour Championship at the start of the month that he was “way better.” This will be his first Ryder Cup.

Dustin Johnson: Johnson, ranked second in the world, is both the oldest and most experienced Ryder Cupper for the U.S., playing in four Ryder Cups and going 7-9-0. Last November, he won the Masters for his second major.

Bryson DeChambeau: DeChambeau, ranked seventh in the world, leads both sides in driving distance and headlines. Just over a year ago, he won the U.S. Open for his first major. He’s played in one Ryder Cup, going 0-3-0.

Brooks Koepka: And whom, for the most part, has DeChambeau made headlines with? His teammate, ranked 10th in the world. The four-time major winner who broke an 18-month winless streak in February with a victory at the Waste Management Phoenix Open, Koepka enters the Ryder Cup with a left wrist injury suffered at the Tour Championship. Koepka’s played in two Ryder Cups, going 4-3-1.

Justin Thomas: Thomas, ranked sixth in the world, has won 14 tournaments on the PGA Tour, including the Players Championship in March, and is still just 28. He’s played in one Ryder Cup, going 4-1-0.

Patrick Cantlay: Cantlay, ranked fourth in the world, enters as the hottest player in the event. He won the BMW Championship in an epic six-hole playoff with DeChambeau, then won the Tour Championship the next week. This is his first Ryder Cup.

Tony Finau: Finau, ranked ninth in the world, won for the first time in five years with his victory at the Northern Trust in August. He’s played in one Ryder Cup, going 2-1-0.

Xander Schauffele: Schauffele, ranked fifth in the world, won gold at the Olympics over the summer. This is his first Ryder Cup.

Jordan Spieth: Spieth, ranked 13th in the world, is the second-most experienced Ryder Cupper, playing in three and going 7-5-2. In April, Spieth won the Texas Open for his first victory in nearly four years.

Harris English: English, ranked 11th in the world, won the Tournament of Champions at the start of the year, and the Travelers Championship after an eight-hole playoff. This is his first Ryder Cup.

Daniel Berger: Berger, ranked 16th in the world, won the AT&T Pebble Beach Pro-Am in February for his fourth Tour victory. This is his first Ryder Cup.

Scottie Scheffler: Scheffler, ranked 21st in the world, has yet to win on Tour, but notably finished second at the WGC-Match Play event in March. This is his first Ryder Cup.