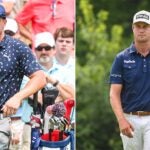 Bryson DeChambeau heard jeers throughout the final round last week, and after the round Harris English defended the embattled star.

Bryson DeChambeau’s summer has been controversial, to say the least.

As his public feud with Brooks Koepka has been reignited, the court of public opinion has seemed to side with Team Brooks. The famous leaked Golf Channel video reignited the spat, and Koepka has not hesitated to add gasoline to the fire.

For every DeChambeau misstep, Koepka has been there to troll his nemesis. One such example of trolling came earlier this summer at the Memorial Tournament. Fans were videotaped calling DeChambeau “Brooksy,” and some were shown the door. Koepka responded with a cheeky video offering free beer to any fan ejected from the grounds.

The jeers have only intensified since as well-served patrons have gravitated away from yelling “Get in the hole!” and instead focused their debauchery on heckling DeChambeau.

That’s not to say all the criticisms have been unearned. The “my driver sucks” fiasco at The Open was not well-received, and players have recently taken to social media to lecture the 27-year-old about not yelling “fore” when his ball sails into the gallery. Team Brooks’ supporters seem to grow more emboldened in their efforts to undermine DeChambeau.

The WGC-FedEx St. Jude Invitational provided another opportunity for the masses to get their shots in at the 2020 U.S. Open champ. Golf Digest’s Shane Ryan followed the DeChambeau-Harris English pairing during the final round, and he went so far as to characterize the gallery’s treatment of DeChambeau as “bullying.”

English shared a similar perspective after the round, coming to the defense of his final-round playing partner.

“It’s not real fair for them to call him ‘Brooksy’ a lot,” English said. “It kind of sucks, and obviously he hears it, and it affects him a little bit. He doesn’t like it, and I think that causes them to do it more.”

DeChambeau is in a no-win situation with the taunting, knowing that if he responds he’ll give even more ammo to the hecklers. But pressing on and allowing it to continue is no fun either.

“It just sucks that that’s out here right now, that they’re trying to irk people like that,” English said. “It’s just unfortunate.”