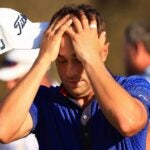 When Justin Thomas gets hot, there aren’t many players in professional golf that can match his firepower. And that’s just what happened Sunday at TPC Sawgrass.

Like an ember in dried brush, it doesn’t take much to set Thomas ablaze. On Sunday, that spark came on the ninth fairway, where he laced a long iron to the front of the green to set up an easy two-putt birdie. That was just the beginning: the next three holes he went birdie-eagle-birdie.

Standing on the 9th tee box, Thomas was three shots behind Lee Westwood’s 12-under lead. After his birdie putt dropped on No. 12, Thomas was two ahead.

Even as he closed out one of the biggest wins of his career, getting his hands on the 24-karat gold trophy didn’t come easy. After his run to take the lead, Thomas hit a lull in the middle of his back nine highlighted by a three-putt bogey on No. 14, which dropped him back into a tie with a resurgent Westwood.

But as often happens with champions at TPC Sawgrass, Thomas held his nerve coming home on one of the most frightening closing stretches in golf, going birdie-par-par to secure the title. Only when his three-footer finally dropped on the 18th green was Thomas able to fully exhale.

“It’s a lot harder [to win] than when there weren’t fans here, that’s for sure,” he said. “I’m sure happy to be back, and I’m so happy to be a Players Champion.”

The win not only puts Thomas in elite company; his 12-under 132 on the weekend will also enter the record books as the lowest in Players Championship history. Even more remarkable? He accomplished the feat with relatively poor putting on Sunday, losing more than two strokes to the field for the round.

Those woes with the putter were more than made up for some elite ball striking, though. He gained 5.6(!) shots on the field from tee to green during the final round as he missed just one green in regulation. During the close of the telecast, Paul Azinger called TPC Sawgrass a “ball-striker’s paradise.” Thomas proved that correct.

This year has been one of challenges for Thomas, some of his own doing, and some not. But among the most impactful was the loss of his grandfather. During his greenside interview, Thomas got emotional when asked about the impact of the late Paul Thomas.

“I wish I could talk to him,” Thomas said with tears in his eyes. “It’s a sign that he was watching.”

If his Paul was watching, he saw Thomas join a shortlist that includes some of the game’s historical elites.

Thomas’ Players Championship win is his 14th PGA Tour victory before his 28th birthday. Only three other golfers have matched that feat since 1960 — Jack Nicklaus, Johnny Miller and Tiger Woods. That’s heady company.

On Sunday, Thomas proved he belongs there.