What’s one of Tony Finau’s favorite lessons? It came after he was ‘acting like a child.’ 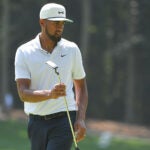 Tony Finau watches a putt on Thursday on the 5th green at Caves Valley.

Like this, after one of his more painful also-rans, a loss in a playoff at the Genesis Invitational in February:

Question: “Obviously you shot a tremendous round today so it’s not like you threw anything away, but at what point do you get tired of all of these top-10s and runners-up that keep accumulating, even those are positive things?”

Answer: “Yeah, it’s bittersweet to be in this position again, but I mean, I never get tired of playing good golf and that’s what I tell myself every week. It’s like sports is about winning, I’ve said that many times. I grew up trying to win every tournament I play, every tournament I play; nothing’s changed. But I know, at the end of the day, you’re going to lose a lot more times than you’re going to win on the PGA Tour. Unfortunately, for me, that’s come really close in the last few years. But I always challenge myself to play good golf and that’s all I try to do. I’m not a quitter; I’m not someone that’s going to fade away into the sunset because I can’t win in these situations. I had another great shot today. I don’t know what else I can say other than I enjoy playing good golf and one of these days it will happen for me and hopefully turn into kind of a domino effect.”

On and on the exchanges would go. Until it didn’t, when on Monday, his drought ended with his victory at the Northern Trust. Still, it makes one wonder just how Finau answered time and time again.

He had an answer for that, too, on Wednesday ahead of this week’s BMW Championship.

“I was playing a high school match my freshman year,” Finau said. “I had on the very last hole, if I two-putted this hole, I would have got into a playoff to win the individual medalist as a freshman, which was a big deal, playing against this senior in high school.

“I lag it up there from about 40 feet, lag it up to about five feet. I go on to lip that one out and then I go to tap it in because I was really frustrated that I had now missed the playoff. I missed that out. I went to tap in — so I ended up five-putting the last green and stomping my feet around the hole, just like acting like a child.

“My dad didn’t say a word to me, and my dad was my teacher and my hero. But he didn’t say a word to me when I left. I was grumpy. I got into the car. I was really, really upset. But just from that silence, I understood what that meant to him, that that was not how he raised me. That’s not what champions do. That’s not how you act on a golf course. He actually didn’t say anything to me, but I was so disappointed in myself that I knew — I said, that’s never going to happen again.

“I didn’t want my actions to portray me as a person that is a brat. I’m not that way. That’s not who I am. So that was a teaching moment for me; I was not ever going to do that ever again. Not only was I mad about missing the short putt for potentially winning a tournament, but I’m going to deal with my losses, take it on the chin and deal with it with class.

“That was a big — again, I was a freshman in high school, so as you would expect, maybe that’s how I should have acted, but I felt like I was better than that, and my parents taught me better than that.”

Finau, two days and one tournament since his second victory, sounded much the same as he had for five years and 142 tournaments.