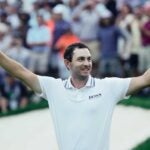 It doesn’t happen often, but occasionally two of the 10 best players in the world turn an event into a two-horse race, where no one else in the field can keep pace. Add in a little passive-aggressive movement between a long drive and an even-longer driver and you’ve got an entertaining stage set. That’s exactly what we saw this week at the BMW Championship. An actual duel.

“It’s a little reminiscent of the duel at the Open Championship at Royal Troon between Henrik Stenson and Phil Mickelson when they separated themselves,” NBC’s Dan Hicks said late in broadcast Sunday, as Patrick Cantlay and Bryson DeChambeau both elevated themselves to 27 under on the leaderboard, five clear of the field.

DeChambeau and Cantlay actually separated themselves earlier in the week, during the second round when DeChambeau’s near-59 pushed him into a tie with Cantlay. Like the boss level of any video game, DeChambeau continued to mash and bash his way around Caves Valley Golf Club often 30 yards ahead of his opponent, but somehow Cantlay stuck with him every step of the way. That clash of playing styles eventually turned into one of the best playoffs in PGA Tour history.

But pause for a second as DeChambeau stood over his ball in the 14th fairway.

DeChambeau spent most of the weekend ahead of Cantlay, on the holes they were playing, at least, and during the final round Cantlay apparently snuck up into the corner of his vision while he was standing over his shot. “Patrick, can you stop walking,” DeChambeau said. Whether that comment stirred something in the group or was an example of how testy things had become for the final pairing, it was the perfect side story to two players taking it ultra deep.

It took until the 71st hole of the championship and the 17th hole of the final round for it to seem like one might pull ahead. Already one shot back, despite being a preposterous 27 under, Cantlay left his approach into the downhill par-3 short and in the hazard when DeChambeau was dry, but off the green. Golf Twitter called the tournament then and there, but DeChambeau must have enjoyed the two-man stalemate too much.

DeChambeau had shown some cracks of his own with his short game early in the day and those issues arose again on 17 as he shorted his soft wedge from the rough and missed the ensuing par putt. On the broadcast, Paul Azinger boldly floated the idea of him having the “chip yips.” Cantlay pitched on from the drop area and made a scrambling bogey himself. No blood.

Fast forward 15 minutes, and 72 holes was not enough, either. Cantlay buried a 21-footer on the 18th for a birdie to reach 27 under once again. With a shorter putt on a similar line, DeChambeau’s putt to win never came close. Off to a playoff they went, the fourth straight week of extra time on the PGA Tour.

On the first playoff hole, a two-putt par from DeChambeau and an all-world up and down from Cantlay. On the second, DeChambeau missed a 6-footer to extend it further. On the third, DeChambeau’s 17-foot putt grabbed the left edge of the cup and refused to drop. “If it were a book, it’d be hard to put down,” David Feherty said of the match. He wasn’t wrong.

Finally, on the fourth playoff hole, DeChambeau broke. He pulled that driver that has been so good to him all week long and sent his ball careening into the creek along the right side. Drop 2, hit 3 onto the green, two-putt bogey, right? Wrong! Cantlay made a rudimentary par as DeChambeau lofted a wedge and spun it back to four feet, where he of course made par to send them to yet another playoff hole.

“This is crazy,” Roger Maltbie said. He could have been describing any part of the playoff, to be sure. But he was describing the two approach shots on the fifth playoff hole. DeChambeau hit a wedge to six feet. Cantlay stepped up and tossed his dart inside three feet. Both players, of course, made their birdies and headed to the sixth playoff hole.

Playing the 18th hole for the fifth time Sunday — once in regulation and four times in sudden death — the golf played out exactly like the show we’ve been watching all day long: Cantlay made a long putt while DeChambeau missed a shorter one. Cantlay’s came from 17 feet while DeChambeau’s measured half as long. The man who gained 14 strokes on the greens alone this week was the champion. It had to end sometime. Everyone knew that. It was a helluva ride until then.

“Sports,” NBC’s Steve Sands said, signing off from the broadcast. “It’s the best.”