A champion unlike any other: Dustin Johnson wins the Masters for his first green jacket 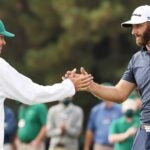 Dustin Johnson, with his brother, Austin, on the bag, won the 2020 Masters on Sunday.

What if Dustin Johnson could blend that smooth-as-Georgia-peach-ice-cream demeanor with that sweet-as-a-pimento-pepper swing? What if he hadn’t tripped up at those previous major championships? The 2010 U.S. Open, where he led by three entering Sunday. The 2010 PGA Championship and the grounded club. The 2015 U.S. Open and the three-putt on 18. The 2018 U.S. Open, where the weekend came. This year’s PGA Championship, where he led by one entering the final round. And let’s not forget an actual trip, at the 2017 Masters, where he entered Augusta National fresh off three-straight victories, only to fall down some stairs the day before the tournament, forcing him to withdraw.

You’d get something that looked a whole lot like Thursday, Friday, Saturday and Sunday of the 2020 Masters, that’s what.

It caps, too, what was 2020’s finest overall performance. A rise back to world No. 1. Four victories total, including the Tour Championship. Top 10s in all three majors.

Johnson started Sunday with a four-shot lead over Im, Smith and Abraham Ancer, then saw it drop to one, over Im, after five holes. Back-to-back bogeys, on 4 and 5, hurt. Birdies on 6 and 8 helped, and after he rolled in a 13-footer for birdie on the par-5 13th, his lead was back to the four he started the day with. He would add birdies on the 14th and 15th for the 20-under total, the Masters scoring record by two strokes.

The next major, in five months, will be right back in Augusta, Ga.: the 2021 Masters.