Steve Stricker on Brooks Koepka: ‘He assures me that he is 100 percent all in’ for Ryder Cup 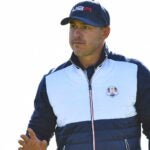 This will be Brooks Koepka's third Ryder Cup.

Brooks Koepka created a mini Ryder Cup controversy last week when he spoke, some might say indifferently, about how he viewed the Ryder Cup.

In an interview with Golf Digest, Koepka called the team dynamic “tough.”

“There are times where I’m like, I won my match. I did my job. What do you want from me? I know how to take responsibility for the shots I hit every week. Now, somebody else hit a bad shot and left me in a bad spot, and I know this hole is a loss,” he said, adding, “it’s different. It’s hectic. It’s a bit odd, if I’m honest. I don’t want to say it’s a bad week. We’re just so individualized, and everybody has their routine and a different way of doing things.”

Some praised Koepka for his candor, while others took offense to his comments. Paul Azinger, the former Ryder Cup captain and current NBC analyst, was in the latter category.

“I’m not sure he loves the Ryder Cup that much,” Azinger said. “If he doesn’t love it, he should relinquish his spot and get people there who do love it.”

On Monday at Whistling Straits, U.S. captain Steve Stricker was asked for his thoughts on Koepka’s comments.

“I talked to him about it. I’ve had experiences with Brooks over many of these teams and the conversation that I have had with him and what I have personally seen in the team room doesn’t jive up to what I was reading in those articles,” Stricker said. “Again, I’m not worried about Brooks. He assures me he is healthy. He assures me that he is 100 percent all in on this team and whatever he needs for this team to become the winner at the end of the week. So again, I’m not worried about Brooks at all. It’s been good talks and he’s ready to get down and start playing.”

Koepka has compiled a 4-3-1 record in his two previous Ryder Cup appearances. He’s scheduled to speak with the media on Thursday.