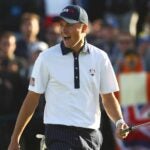 Jordan Spieth will play in his fourth Ryder Cup later this month.

The 2021 U.S. Ryder Cup team is set. Captain Steve Stricker rounded out his squad with six captain’s picks made live on Golf Channel on Wednesday, giving the Americans the 12 players it will take to Whistling Straits later this month.

Collin Morikawa, Dustin Johnson, Bryson DeChambeau, Brooks Koepka, Justin Thomas and Patrick Cantlay already earned spots on the team via the points standings that were finalized after the BMW Championship on Aug. 29. That left one more event — last week’s Tour Championship — for any of the potential picks still alive in the FedEx Cup Playoffs to audition. Now, three days later, we have our names.

“That’s what made the choices in my eyes pretty easy, and after consulting with the six guys that made the team and my assistant captains, we landed on these six guys pretty easily just because of their form, the way they fit Whistling Straits, their demeanors on and off the golf course and in the team room,” Stricker said. “So it just seemed like a natural perfect fit for these six to join the rest of them. I know they are extremely excited to be a part of it.”

Four of the names — Finau, Schauffele, Spieth and English — weren’t much of a surprise. That group ranked 7th, 8th, 9th and 10th, respectively, in the points standings. Finau won the Northern Trust 2 1/2 weeks ago, Schauffele is the fifth-ranked player in the world, and Spieth, now a four-time Ryder Cupper, has rebounded with a big year (a win and nine top 10s) after going winless from 2018 to 2020. English won twice last season and on Tuesday was one of five players nominated for PGA Tour Player of the Year.

After those four, however, there was some debate regarding who would make up the final two spots. But the resumes of Berger and Scheffler won out. Berger, 12th in the standings, won the 2021 AT&T Pebble Beach Pro-Am and finished the season with 14 top 25s. He ended the year with a T11 at the Tour Championship.

Scheffler, 14th in the standings, had eight top 10s and 16 top 25s in 29 starts this season. He tied for 22nd at the Tour Championship. The 25 year old ranked 7th on Tour in birdie average (4.39), a feather in his cap that comes in handy in match-play events.

One player who was in the mix for a selection — and, at 11th, was the highest-ranked player not picked — was Patrick Reed.

Reed is 7-3-2 in the Ryder Cup and has been one of the Americans’ strongest, most passionate players over the last three meetings, but he only recently left the hospital due to bilateral pneumonia. He finished 25th at the Tour Championship — his first start in over 3 1/2 weeks — and said he wouldn’t have been there if this wasn’t a Ryder Cup year. There’s also that incident from the 2018 Ryder Cup in Paris, in which Reed was critical of captain Jim Furyk. In the only team event since, the 2019 Presidents Cup, Reed took heat from the Australian crowd due to a controversial penalty the week before, and his caddie/brother-in-law Kessler Karain was banned from Sunday’s singles matches after a physical altercation involving a fan the day before.

“Patrick Reed, that was a very, very difficult call,” said Stricker, who said Reed was his first call. “I kind of lost sleep over that one. He’s a tremendous competitor, he brings a lot to match-play golf. His record here at the Ryder Cup is pretty darn good. It was a very difficult call. It wasn’t an easy one. But I think it was just the uncertainty of his health, and really the lack of play that led to our decision down the stretch.”

Others not picked but in the conversation were Webb Simpson (13th in the standings), Jason Kokrak (15th), Sam Burns (16th), Billy Horschel (17th), Kevin Kisner (18th) and Kevin Na (19th). Phil Mickelson, the 20th-ranked player in the standings, was announced as a vice captain last week.

It will be the first Ryder Cup for Morikawa, Cantlay and captain’s picks Schauffele, English, Berger and Scheffler. But Stricker isn’t worried about a team made up of six rookies. He said they did some analysis of U.S. rookies in the Ryder Cup since 2008, and those players are 40-29-17.

“Some of them aren’t really rookies,” he said. “They have played in past Presidents Cup teams. Some of these guys have match-play competition under their belt as well and other events that they played. So we are excited. So we don’t really feel like they are rookies, we are just happy to have these guys.”

The U.S. had previously put its team together with eight automatic qualifiers and four captain’s picks, but last summer, due to Covid-19 wiping out some of the season, the PGA of America announced it would use six captain’s picks instead. When the 2020 Ryder Cup got pushed to 2021, they stuck with the six-pick decision.

Europe will finalize its nine automatic qualifiers at the conclusion of Sunday’s BMW PGA Championship, and captain Padraig Harrington will make his three captain’s picks the following week.

The Ryder Cup is Sept. 24-26 at Whistling Straits in Kohler, Wis.