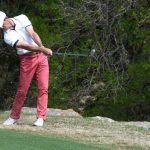 Billy Horschel hits a shot on Sunday on the 2nd hole at Austin Country Club.

Billy Horschel, earlier in the week, said he’d be playing one opponent at the World Golf Championships-Dell Technologies Match Play. Just not the one you’d immediately think of when you think match play. “I’ve played match play enough,” he said. “I’ve tried to play the opponent. I’ve tried different strategy, and I think over the last couple years I realized just trying to play the golf course. I mean, there are certain times you got to play your opponent, but I think if you just try and make the score on that hole what you would do in a stroke play format, that’s what suits me best. So that’s what I’m going to do, play my game and then see where it puts me.”

It put him at the top. Horschel beat the course, and along the way, beat his opponents. He defeated his final one, Scottie Scheffler, 2 and 1, in the championship match for his sixth PGA Tour victory.  Here are three things you need to know after Sunday’s play at Austin Country Club in Austin, Texas.

5th hole (372-yard par-4), even: Horschel hit his tee shot left before it kicked out to the right and back into the fairway, then hit his approach right of the green — only to pitch in from 42 feet.

6th hole (593-yard par-5), even: Scheffler hit his tee shot left and out of bounds — but hit his fourth shot to within 5 feet to split the hole.

7th hole (201-yard par-3), Horschel 1 up: Scheffler hit his tee shot over the green, and he couldn’t get up and down. Horschel won on a par.

12th hole (563-yard par-5): Horschel 2 up: Scheffler hit his tee shot into the water. But Horschel hit his third shot into the sand and couldn’t get up and down to give Scheffler a shot on a 10-footer for par — which he missed. The players split the hole on bogeys.

16th hole (568-yard par-5), Horschel 2 up: Horschel hit his third shot into the right greenside bunker, but was able to get up and down to split the hole.

17th hole (131-yar par-3): Horschel 2 up: Horschel and Scheffler each par the hole, and Horschel wins the title.

Billy Horschel def. Victor Perez 3 and 2: The veteran Horschel took the lead for good when Perez bogeyed the par-4 10th hole after missing a 6-foot par putt. He built his lead to 2-up on the par-3 11th after Perez hit his tee shot into the water, and he led 3-up after 14 after Perez missed a 5-footer for par.

Scottie Scheffler def. Matt Kuchar 1-up: Scheffler, who played his college golf at nearby Texas, led 2-up after 11 holes, then hit into the water on consecutive holes to even the match. He reclaimed the lead on the par-3 17th after hitting to within 10 feet and dropping the birdie putt, and he and Kuchar each parred 18.