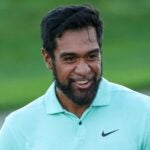 On Monday, Tony Finau won for the first time since 2016.

After a long final day of a long weekend in New Jersey, Tony Finau has snapped a long victory drought.

With a par on the first hole of a sudden-death playoff against Australia’s Cameron Smith, Finau captured the storm-delayed Northern Trust, the opening event of the FedEx Cup Playoffs, which had been pushed by foul weather to a Monday finish.

The victory, the second of Finau’s career, was his first Tour title in more than five years since his breakthrough win at the 2016 Puerto Rico Open.

It came on the strength of a final-round 65, the best score turned in all day and one that left him in a tie with Smith, at 20 under.

Jon Rahm, who slept on the lead every night of the tournament but stumbled down the stretch on Monday, finished in solo third, two shots back.

“Man, I just fought,” Finau said told Amanda Balionis of CBS after celebrating his win with a gentle fist pump. “This is pretty cool to be standing here, winning a golf tournament.”

One of the most popular players on Tour, the 31-year-old Finau is known not only for his power and easygoing demeanor but also for a cluster of close calls that have prompted some to question his ability to close. Heading into this week, he had more top-10 finishes between victories (20) than any other player on Tour.

As play got underway on Monday, Finau looked to be on pace for another also-ran showing. He began the day in a tie for third with Justin Thomas, trailing both Smith and the red-hot world No. 1, Rahm, by two shots.

Still trailing by two when he made the turn, Finau went on a torrid run, scorching the back nine with a five-under 30 that included a birdie, eagle, birdie stretch on holes 12 through 14. Another birdie on the short par-4 17th, which came as Rahm was making his first bogey of the day two holes behind, vaulted Finau into the lead for the first time.

Even as Rahm fell back, Finau still had to contend with Smith, who has become a fixture atop leaderboards the season. Steadying himself after a double-bogey on the 5th hole that saw him rattle one shot into the trees and send another into the water, Smith reeled off four back nine birdies. The last of those, set up by a deft chip to tap-in range on the 17th, put him in a deadlock with Finau.

On to extra holes, extending an event that had already been stretched into a five-day affair by the arrival of Tropical Storm Henri, as tournament organizers opted to scrap Sunday’s play. Whether the final round would be played at all became a question Sunday night and Monday morning, as some 9 inches of rain fell on Liberty National. But the course held up well under the deluge, with little standing water but softened enough so that Monday’s round was played under lift-clean-and-place rules.

Sudden death began on the 490-yard 18th hole, and Smith entered as the historical favorite, with a 3-and-0 career playoff record compared to Finau’s 1-and-3 mark in extra holes. But when Finau found the fairway and Smith spun his tee shot wild right out of bounds, their head-to-head was over almost as soon as it had started. An approach to the center of the green and two-putts later, and just like that, Finau’s long dry spell was over.

He won’t have to wait long to try for another. The FedEx Cup playoffs resume Thursday at the BMW Championship, at Caves Valley Golf Club, in Maryland.