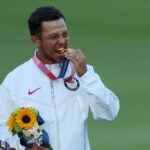 Xander Schauffele poses with his new trophy Sunday in Japan: a gold medal.

KAWAGOE, Japan — Stefan Schauffele worked hard to get into position to see his son win a gold medal. The already tight quarters outside the rope line had swelled, but not with fans. Hundreds of Japanese volunteers were faithfully tracking their native son, Hideki Matsuyama, and they were all obscuring Stefan’s path.

Schauffele popped under one rope into a fenced off area, then back out around the grandstand. He had been told he couldn’t walk around the 18th green, but squeezed between a grandstand and hospitality tent. His nickname is Ogre, but Shrek isn’t nearly this nimble. He stormed past the Korda sisters, who sat together on the grass. Then past Maria Fassi and Team Mexico. He paused to watch his 27-year-old son Xander hit perhaps the biggest shot of his life, a wedge from 98 yards that spun back about 15 feet, leaving a 4-footer for the gold. Stefan was on the move again.

Bobbing and weaving through the crowd at this fan-free Olympics, Schauffele circled the green and finally reached a fenced off area where he was allowed. By now, the broadcast had stuck a camera in his face. Any reaction will do, right? The only person who emotes less than Xander is his father, who has been his lifelong swing coach. He promises he never claps. “I am the difference between a spectator and an observer,” he said on Saturday. “It would be like clapping for yourself.” When the putt dropped, the son exhaled — “Just in shock,” he would say later — and thought of his dad right away. They embraced moments later without saying much. Just knowing smiles. We did it.

It’s impossible to tell the Xander Schauffele story without mentioning his father, even if the latter would prefer this story to be all about the progress of the former. Stefan was an Olympian hopeful from Germany, in the decathlon. During his training for the 1988 Olympics, a drunk driver crashed into Stefan’s vehicle, leaving him badly injured and blind in his left eye. When he watches Xander play from afar, it’s always through a monocular.

During the final round of the Olympics, watching Xander from afar was the way to do it. The closer you got, the more the volunteers swarmed. And there was too much happening all over the golf course. Rory Sabbatini, playing for Slovakia, shot the round of the week from seven groups ahead of Schauffele, 61 with 10 birdies, one hole-out eagle and two bogeys. Sabbatini’s worst swing of the day led to a bogey on 16 and had him cursing himself out and staring into the sky. “I got what I deserved,” Sabbatini said in the moment. His birdie-birdie finish guaranteed him a silver medal. Seven — seven! — others hovered in the 15 or 16 under area, and all of them finished tied for third, leading to an epic playoff.

Schauffele had been in cruise control the entire round until the 14th, where he blew his drive on the par-5 into the trees right, on the edge of the property. Stefan watched along through that monocular, more than 100 yards away and plenty confused. What type of drop was his kid taking, drainage or unplayable? The strokes start adding up even more quickly with Matsuyama on the green in two. “This is for par, then,” Stefan said, trying to keep track. “Be smart, boy.” Xander got up and down from 46 yards for a clutch, lead-saving bogey while Sabbatini yukked it up on the practice green.

Dad watched most of the finishing holes hundreds of yards from his son, receiving updates via Corey Yoshimura, a PGA Tour marketing director who was working as a spotter for the broadcast. The radio earpiece communicated everything Stefan needed to know.

When Xander made his eight-foot birdie putt on 17, Stefan was already left of the landing zone on 18. That’s where he began that jaunt around the viewing area. His son made things interesting by blowing his drive right again (“terrible drive,” Xander said later), bounding off a volunteer’s back. After laying up into the fairway, Xander’s smooth wedge landed where most wedge shots landed on Sunday, spinning back like all those wedges before him.

“I closed my eyes and I just tried to really become more present and just focus on the four-footer,” Schauffele said afterward. “Once again I just reminded myself, this is just a four-footer, all you have to do is make it, no big deal.”

No big deal — just a putt for Olympic gold and a father’s dream realized. The putt dropped into the center of the cup. Xander didn’t holler, or throw his arms to the air, or even fist-pump. He coolly shook hands with his competitors, hugged his caddie once more and headed straight to his father. Two hours later, with his son on top of the podium, dad was filming on his phone, his mask on, singing out the words to the Star Spangled Banner.

It feels like a foreign idea now, but any number of things could have stopped Schauffele from playing in the Tokyo Olympics. As recently as the U.S. Open at Torrey Pines, his team was still mulling it over. For one, there’s the event he’s playing in next week, 13 time zones away in Memphis, Tenn., and no special travel arrangements had been guaranteed by the PGA Tour. There’s the fact that Louis Oosthuizen pulled out, and Louis’ physio was set to work with Xander all week, an issue that became more apparent as Xander battled neck tightness all weekend. There was the IOC crackdown on AirBnbs, where Team Xander wanted to stay. If he had to stay in the Olympic Village, at least 75 minutes from Kasumigaseki Country Club, he would not have made the trip. Pro golfers can be extremely particular. The Schauffeles think that’s important.

The hidden asset was that they were going to Japan, and Stefan knows Japan well. He once owned a business here and made biannual trips. He even lived in Tokyo full-time for two years. He knows Japanese citizens follow the rules, but on occasion you can push those rules. That’s exactly what he did. He leaned on his old connections to find a more suitable hotel for Xander’s crew, with all kinds of space. Hotels in downtown Tokyo have room for just a single full-size bed, but Team Schauffele’s four rooms out nearer the golf course had two queen beds apiece.

“That gave [Xander] an enormous comfort level,” Stefan said. A “leg up,” even, on the competitors who followed all the guidelines. With Tokyo under a state of emergency during the Games, alcohol is only being sold before 8 p.m. local time. There’s none on offer in Kasumigaseki’s clubhouse. But Stefan had been sneaking beers in to KCC all week, burying them in the head of the golf travel bag as they went through security. On Sunday, finally, he was caught in the act, and even fessed up to how much he’s gotten away with. He had to move forward without the suds in tow.

While players in the field were only allowed to bring one caddie and one personal coach, one of Stefan’s old business partners has been staying with Team Schauffele at the hotel all week. “He’s taking care of everything,” Stefan said. “Without him, we’d be screwed.” Whereas part of the field has been making that commute back to the Olympic Village each night, Stefan makes one call when they’re thinking of leaving the golf course. When they arrived back home, a full spread of Japanese food awaited them. Something different every night. From restaurants owned by old friends, and friends of friends.

Knowing the Schauffele lineage, and how Xander’s mom’s parents both still live in Tokyo, the win would have set off one helluva Schauffele party during a non-Covid Olympics. When he played here during the 2019 Zozo Championship, as many as 40 extended family members were in attendance. Instead, Xander and father were leaving their hotel for one nearer the airport Sunday night. The gold medalist will be on a chartered flight to Memphis Monday morning. Dad had a commercial flight of his own.

The penultimate question of his winner’s press conference was simple, if unfortunate for the newly-minted gold medalist to ponder: How do you plan to celebrate tonight?

“Well, it’s looking a little bit late,” he said. “Eight o’clock’s the closing call for alcohol sales currently in Japan due to Covid. So hopefully my boys or someone got some alcohol.”

Dad’s 12 beers were waiting for them in the team van.