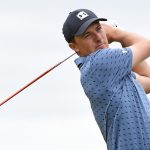 Jordan Spieth hits his tee shot on Sunday on the 5th hole at TPC San Antonio.

Back after winning three major championships by 23 and rising to world No. 1, then not winning anything at all and free-falling to around 100. Back after having every man, woman and child with clubs and a keyboard offering a theory as to why. Back after a late-winter tease — a share of the 54-hole lead at the Waste Management Phoenix Open in February, then an outright third-round lead at the AT&T Pebble Beach Pro-Am the week later.

After 1,351 days since his last victory, at the 2017 Open Championship, Jordan Spieth is a winner once again. He shot rounds of 67, 70, 67, then a final-round 66 at TPC San Antonio to win the Valero Texas Open at TPC by two over Charley Hoffman and four over Matt Wallace. It’s his 12th PGA Tour victory, and 14th overall.

And now there’s immediately thought of back-to-back. Next week is the Masters at Augusta National, where Spieth once held the 72-hole scoring record.

But back to this week first. This is Spieth, who in the best of times and the worst of times plays a round as up and down as his career arc. Sunday was no different, though most of it came from Hoffman.

One of the game’s most talented and popular players has seemingly figured things out again. Golf has its best story of the year. And now comes four majors.

“There’s some key moments here and there, different time periods where I felt like things were turning around. There’s also moments I look back on where I hit balls till my hands bled and I wasn’t doing the right thing and I just went home thought about it; sleeping, lost sleep. This sport can take you a lot of different directions. So I think it’s just most important to embrace when I have moments like this and just really appreciate them and keep my head down, keep the process that I’m doing. Obviously things are starting to work without feeling like I quite have it all, so that’s a really good sign. Take some confidence into next week as well.” — Jordan Spieth