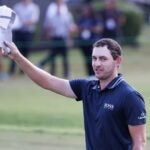 Patrick Cantlay on Sunday after his victory in the Tour Championship.

The announcers on NBC’s Sunday broadcast of the Tour Championship were talking about pressure. And Patrick Cantlay was eating.

Cantlay’s lead was one stroke during the final round, three holes remained at East Lake Golf Club, and 15 mill was going to the winner. And there he was, ruining his dinner.

“Cantlay having no problem grabbing a snack as he was walking up that hill,” analyst Paul Azinger said on the broadcast.

No problem at all.

From there, Cantlay hit to 5 feet on his approach shot on the par-4 16th for a birdie to take his lead to two. On the next hole, the par-4 17th, Cantlay hit over the green on his second shot, and hit short of the green on his third — only to pitch on and escape with both a bogey and his lead still intact. Then on the final hole, the par-5 18th, Cantlay pumped a 361-yard drive, his longest drive of the week, hit his second to 11 feet and two-putted for a birdie, a one-under 69, a 21-under total and the Tour Championship win.

“Cantlay is stoic,” analyst David Feherty said on the broadcast. “Has not backed down an inch this week.”

Neither did Jon Rahm, the runner-up. Cantlay entered the final round two strokes ahead, Rahm whittled it to one at various points and gave it a run to drop it to none on 18. After a 352-yard drive down the fairway, he ran his second shot just past the hole and off the green, then narrowly missed a chip-in for eagle. He finished at 20-under, while Kevin Na finished third, at 16-under, and Justin Thomas was fourth, at 15-under.

Had players not started with strokes ahead of the event based on their standing in the FedEx Cup, Rahm and Na would have tied for first.

“He earned it,” Rahm said of Cantlay. “He played amazing. That up-and-down after missing from 17, the second shot from 18 to almost make it is even more impressive. “I think you can say he won this. He played amazing golf.

— Patrick Cantlay, at 20-under, leads Jon Rahm by two shots and Justin Thomas by five entering the final round.

— Cantlay birdies the 204-yard, par-3 2nd hole after hitting his tee shot to 6 feet, and he moves to 21-under, three shots ahead of Rahm and five in front of Thomas.

— Rahm birdies the 443-yard, par-4 5th hole after hitting his approach shot to inches, and Cantlay bogeys after three-putting from 70 feet, and Cantlay’s lead is one shot. Cantlay is at 20-under, Rahm is at 19-under and Thomas and Kevin Na are at 14-under.

— On the 579-yard, par-5 18th hole, Cantlay hits a 361-yard drive, his longest of the week, hits his second shot to 11 feet, and he two-putts from there to win the Tour Championship and the FedEx Cup.

“It was like a one-on-one match play feel, and I think it will be great practice for the Ryder Cup.” — Cantlay on his final-round pairing with Rahm