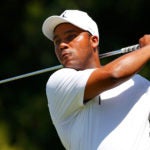 Harold Varner hits his tee shot on the 9th hole at Colonial Country Club on Friday.

The leader triple-bogeyed his first hole, then birdied five of his last six. One of the two players a stroke behind is showing his old form. The other is showing off his new form.

Here are three things you should know after Friday’s second round of the Charles Schwab Challenge at Colonial Country Club.

Harold Varner entered the day with a share of the lead – then tripled the 10th, his opening hole. His drive went right, rolled a bit, then ended up on a bridge, which forced a drop. He finished with a 7.

Spieth has a bit of weight on his shoulders, the three-time major champion looking for his first win since the 2017 Open Championship. He followed up a 5-under 65 on Thursday with another on Friday – which included a three-putt from 3 feet on the 3rd.

DeChambeau, too, has a bit of weight on his shoulders. All over really. He bulked up over the PGA Tour’s three-month hiatus due to the coronavirus, and he muscled his way to a bogey-free 65 on Friday.

As the first tournament on the calendar since March, the Charles Schwab Challenge drew an elite field – and many are in contention.

Following a 7-under 63, Rory McIlroy, the world No. 1, is two shots behind Varner, as is Xander Schauffele and Collin Morikawa. Justin Rose, the other first-round co-leader, and Justin Thomas lead the group three strokes behind.

Also making the cut, which was -2, were Brooks Koepka and Patrick Reed. As did Jhonattan Vegas, doing so only after dropping a 46-footer on the last.