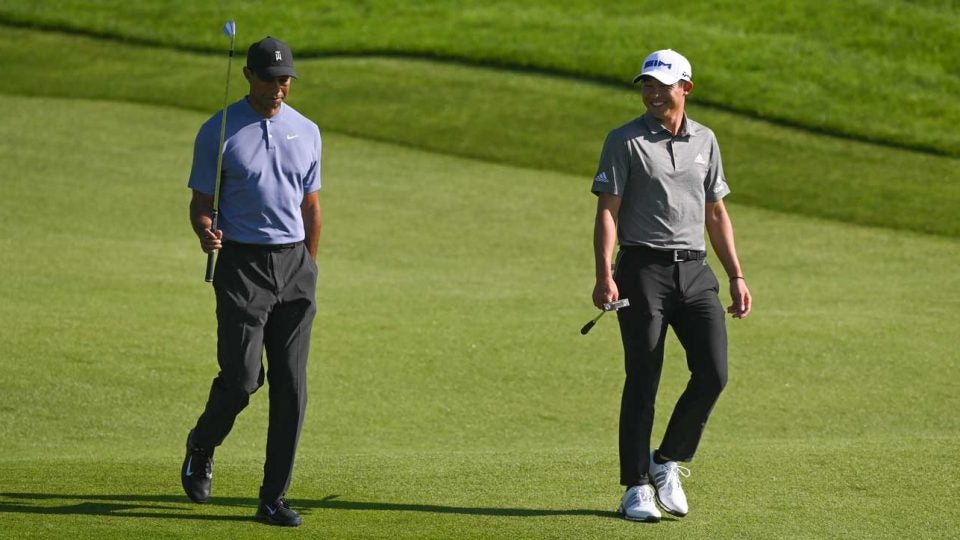 Tiger Woods and Collin Morikawa talk during the opening round at the 2020 Farmers Insurance Open.
Getty Images

Rising star Collin Morikawa is bound to some history in the years to come on the PGA Tour. But he got started early on that quest Thursday at the 2020 Farmers Insurance Open by doing something with Tiger Woods that no one has done before.

Morikawa played with Woods in the opening round on Torrey Pines’ North Course. The 22-year-old put together a solid round of two-under 70 playing alongside the 15-time major champion, who bested him by one shot with a 69. But none of the shots either player hit are particularly notable. What is notable is the fact that they played together at all.

It turns out that Morikawa is the first player to be paired with Tiger Woods in a PGA Tour event who was born after Tiger turned pro.

Woods left Stanford after his sophomore year to turn professional and join the PGA Tour full-time in the summer of 1996, making his first start on August 29th at the Greater Milwaukee Open.

It’s a good thing he did, too, because he went on to win his first event that fall at the 1996 Las Vegas Invitational, and then followed it up with another victory at the Walt Disney World/Oldsmobile Classic two weeks later, months before his 21st birthday. Four more wins followed in 1997, including his first Masters title, and now, more than 23 years later, he’s accumulated 82 in all.

Morikawa, on the other hand, was born in Los Angeles on February 6, 1997. By that time, Woods already had three PGA Tour wins to his name. But the kid is no slouch. In fact, Morikawa captured his first Tour win more quickly than Tiger did. He made his debut at last year’s RBC Canadian Open in early June and won the Barracuda Championship just a few weeks later in July.

Morikawa has continued to post solid results, rising to No. 55 in the Official World Golf Ranking and securing his spot with Matthew Wolff and Viktor Hovland as the future stars of the game. So while all of this might be painful to hear, depending on your age, you should be comforted to know that we’ll get to enjoy Morikawa’s play on Tour for many years to come. Maybe even Tiger, too.

The pair tee off for the second round of the Farmers Insurance Open at 1:40 p.m. ET on the difficult South Course, the site of Tiger’s U.S. Open win in 2008 (when Morikawa was still just 11 years old).