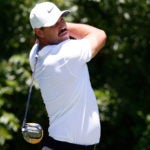 Brooks Koepka was very congratulatory of a Jon Rahm chip-in on Thursday.

Golf is back, f-bombs and all.

“Pretty f—ing good there,” Koepka said to his playing partner.

“Well, we were hoping for better audio with no fans surrounding the course,” Nantz said. “We apologize if anybody was offended by what they may have heard there.”

It could have been louder.

Players had been asked to wear individual mics during play. Only Rickie Fowler, in the group ahead of Rahm and Koepka, agreed to wear one.

On Tuesday, Rahm admitted he, too, would likely offend golf’s PG rating. And he wouldn’t be alone.

“Now, selfishly, because of who I am and I know how I am on the golf course, I wouldn’t support it just because they might need a 20-, 30-second difference from live, might be a little bit delayed,” Rahm said. “And I’m not the only one; a lot of people swear or something comes up where you can hear it. I don’t think it would be the best thing to do.”

The hot-mic clip is below, and heads up: It contains the language described above.