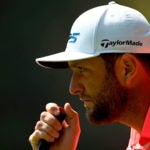 Jon Rahm felt it was important to use his platform in a call for unity.

Last week, Jon Rahm made a series of social media posts in support of “getting rid of hate, bigotry and racism.” PGA Tour players aren’t often the most outspoken sportsmen on social issues, but as protests against police brutality have dominated the American consciousness, Rahm felt he should add his support to the movement.

He posted statements in English and Spanish accompanied with the caption #BlackLivesMatter. “Let’s continue the conversation in support of our Black community, embrace our differences and empower each person to greatness,” he wrote.

On Tuesday morning at his pre-tournament press conference at the Charles Schwab Challenge, Rahm explained why he felt it was important for him to speak up.

“Well, as a Hispanic immigrant in the U.S., even though I’m not even close to experiencing what some people have experienced in this world, even myself just speaking Spanish with one of my teammates or with people in some public areas, I’ve gotten dirty looks,” Rahm said. “I’ve never been racially profiled for the color of my skin, but I have had some experiences. And it’s not a good feeling.”

Rahm has continued to spread a message of unity.

“I can’t fathom the reason why anybody would treat somebody differently just the way you look or they sound or what you believe in,” he said. “We’re all the same. We’re all human beings, and we should all be treated the same way. To me it’s as simple as that. And when this whole thing broke out, I’ve tried to reach out to understand more profoundly what’s going on. Because if I’ve somehow experienced a little bit of what racism can be like, I can’t imagine what some people have experienced throughout their whole life, right?”

Rahm referred to this week’s protests as the biggest civil rights movement in modern history and felt that his position compelled him to reach as many people as possible.

“As an athlete in a mainly white sport with somewhat of a platform on social media, I believed it was my duty to — at least not my duty but my belief — to support this cause and try to reach as many people as possible. I understand you can’t make everybody aware of everything, but if I can just have one more person understand the situation and support it, to me it’s a win,” Rahm said.

Rahm, the No. 2-ranked golfer in the world, tees off alongside Rory McIlroy and Brooks Koepka on Thursday.