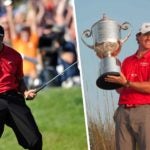 Peak Tiger Woods has no parallel in the modern game. Sorry, Peak Rory.

Which PGA Tour player was the best AT his best? It’s a frequent topic of golf discussion that has just one answer: Tiger Woods.

The old guard might make an argument for Jack Nicklaus, but as for the modern game, Woods has no parallel. But who is second? And who is third? Remember when we had a “Big Three” with Jordan Spieth, Jason Day and Rory McIlroy? Or was it a Big Four with Dustin Johnson? It was difficult to decide which pro’s 6th gear was most powerful. Thankfully, the guys at DataGolf have solved the riddle for us.

Thanks to their newly released All-time Ranking, we can see that Peak Tiger’s best competition thus far is Peak Vijay Singh. It’s worth noting this spans the ShotLink period of 2004 onward. Peak Nicklaus might have a bone to pick.

Singh was at his best in early 2004, at which point he was expected to shoot three strokes better than the average PGA Tour field per round. The data set uses a given players last 150 rounds and gauges what a player would be expected to do in his next round to construct the ranking. (It’s worth noting that Woods had many peaks, and his 2000-2001 dominance was not included in this data set.)

That all might seem obvious to you, but within the ranking are plenty of nuggets worth noting, like how Jason Day’s peak was slightly better than that of Jordan Spieth, Dustin Johnson or Rory McIlroy. Day’s epic run in 2015 edged out Spieth’s in 2015, Johnson’s in early 2018 and McIlroy’s in the summer of 2012.

Now, players with a longer career are going to have many more opportunities to peak. Ten years from now, it’s very plausible that Jon Rahm’s best is better than Jason Day’s best. But for now, it’s great to see that young Jon’s lightbulb shines pretty damn bright compared to his competition.

It’s also worth noting Phil Mickelson’s peak was lower than some of the other best players since 2000. Mickelson’s peak came during the 2004 season, which at that time saw Woods, Singh and a great stretch from Ernie Els. Peak Mickelson, according to the ranking, was the 4th best player in the world at that time. His best is only 15th-best since 2004 began. That feels … low, right? Is Mickelson overrated? You won’t hear that argument from me. The longevity of his career speaks for itself.

Check out the rest of Data Golf’s all-time ranking here.

Billy Horschel calls for arm-lock putting ban: 'Guys are doing it too good'