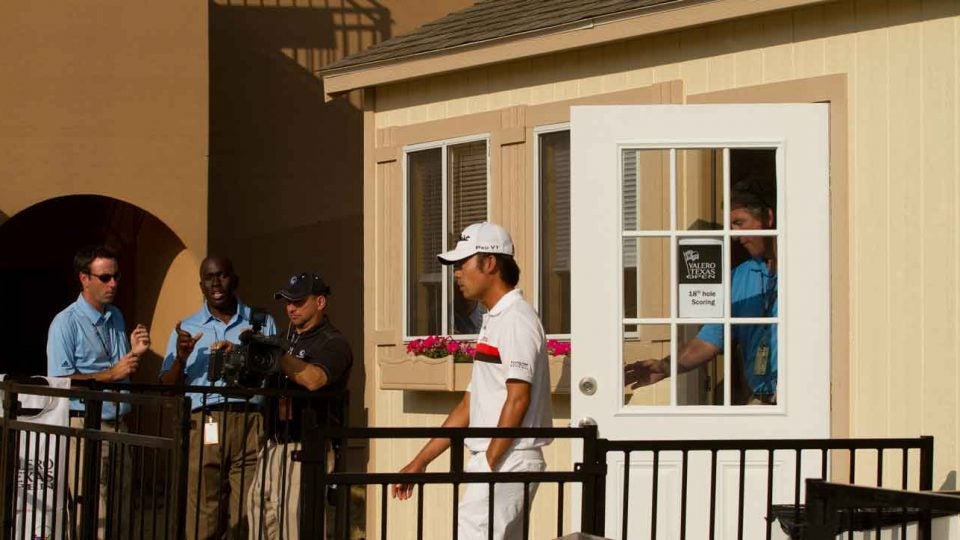 Kevin Na walks out of the scorer's trailer after the first round of the 2011 Texas Open.
Getty Images

The play-by-play looks like something out of a basketball player’s shot chart. Not a golfer’s.

It was after that 48-yarder when Kevin Na emerged from the nasty tree stuff on the ninth hole at the 2011 Texas Open, on his way to a duodecuple bogey 16 (12-over-par). The gallery applauded. He grinned. And he did again this week, when the tournament would have been played had it not been for its cancellation due to the coronavirus.

That time Kevin Na made a 16 at the @ValeroTxOpen. pic.twitter.com/cQO2J9cHp4

The PGA Tour followed up on its social media accounts.

“That time Kevin Na made a 16 at the @ValeroTxOpen,” one tweet read. Then some quick math. “If Kevin Na would’ve made par on the 9th hole in Round 1 of the 2011 @ValeroTxOpen he would’ve shot 68,” another tweet read.

The damage started off the tee, where Na hit his ball to an unplayable spot, picked it up, went back to the tee, then hit it right back to the same spot — before proceeding to drop his club in frustration on the follow through. The 5-foot, 10-inch shot, his fourth, hit him, leading to a penalty. Seven shots later, he finally escaped.

“I have no idea what you have,” caddie Kenny Harms said as they walked to the green.

Na maintained his lighter attitude a year later at the Texas Open, when he and Harms went back to their forest foe during non-tournament play. He improved his lie first with a garden shovel. Then an ax. Followed by a garden clippers. Finally, he used a chainsaw.

When the tournament started, Na took out his 2011 shirt and hung it from one of the trees in the area.