Harold Varner: ‘Being on the golf course, it helped me’ 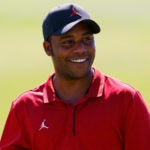 Harold Varner shot a 7-under 63 to take a share of the first-round lead at the Charles Schwab Challenge.

Harold Varner hit his first shot at Colonial Country Club left. It landed in a bunker. He was angry. This was no way to begin the Charles Schwab Challenge, the PGA Tour’s event in nearly three months due to the coronavirus pandemic.

He was playing golf.

After not playing since the middle of March, after witnessing the social unrest following George Floyd’s death in police custody on Memorial Day, after helping guide the PGA Tour’s response as one of its few black players, he was happily playing golf.

“Yeah, I know what’s going on, but when I’m on the golf course, I’m trying to play well,” Varner said. “The reason I have a platform is because I’m really good at golf. I just need to focus on that, and to be honest with you, being on the golf course, it helped me. It’s my getaway, I guess.

“But I didn’t think it would be like that until I got on the first hole and I hooked one super far left and I was pissed, like it was good. Those juices are awesome.”

Varner played golf as good or better than every player on Thursday.

He fired a 7-under 63, good for a share of the round-one lead with Justin Rose. He hit every green in regulation – putting for birdie on every hole – for only the second time in his career. (That’s also the first time that’s happened at Colonial in 10 years.) He started with two birdies – he eventually rebounded from that opening tee shot by dropping an 18-footer for a 4 on the par-5 first – and made no bogeys.

“Just had a really good game plan,” Varner said. “Just hit a lot of fairways so you give yourself a lot of chances to hit greens, and man, it’s just fun to just get back out there. It didn’t matter if I shot 80 today. I love playing golf, but you don’t realize it until it’s taken away.”

It was certainly different.

Coronavirus testing. Social distancing. No fans. When his 11-footer on the last fell for a share of the lead, there were few cheers. He said afterward the absence of noise was not a problem. But the absence of a bit of physical contact was. A fist-bump just doesn’t do the job.

“Yeah, I’m a big hugger,” Varner said. “I love to hug people. I love to just – I care about people. It’s weird. Like you don’t realize how much a handshake matters, looking a man in the eye or a woman, whatever that may be, you don’t do that. So I’ve been struggling, honestly.”

About 3 ½ hours before Varner teed off, the Tour also honored the work to end racial and social injustice in the country.

A moment of silence at 8:46 a.m. local time in Fort Worth, Texas was observed, the time recognizing how long George Floyd was pinned to the ground by former Minneapolis police officer Derek Chauvin before dying on Memorial Day. The 8:46 a.m. tee time was also kept open, and the 65 golfers on the course and others at the Charles Schwab Challenge came to a stop.

The gesture follows Varner’s letter last week calling for unity, along with a letter that commissioner Jay Monahan sent to players last week entitled “a time to communicate and search for answers,” and a video with Monahan and Varner labeled “an open and thoughtful conversation.”

Varner wasn’t on the course yet at 8:46, but watched what unfolded. He thought it was “pretty cool.”

“When I got to the gym, it was on TV, and I just couldn’t hear, but I could see that they were just – man, I don’t really know what they were thinking on the golf course, but it was just crazy what they did,” he said.