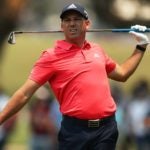 Sergio Garcia pictured during the first round of the 2019 Australian Open.

Two-time major champion Tony Jacklin thinks Sergio Garcia is a “marvelous Ryder Cup player,” and Jacklin is something of an authority on the subject, having captained four European teams in the biennial event.

But that’s pretty much the only positive thing Jacklin had to say about Garcia during a recent interview with Golfweek‘s Adam Schupak, in which he laid into the 2017 Masters champion for wasting incredible talent that he thinks could — and should — have resulted in many more major victories.

Shupak’s interview with Jacklin, which you can read here, is full of candid responses from the Hall of Famer on subjects ranging from the Ryder Cup to his devastating Open Championship loss to Lee Trevino in 1972, and is well worth a full read.

But it’s Jacklin’s comments on Garcia that should raise more than a few eyebrows.

When prompted to name the “biggest underachiever in golf,” Jacklin wasted no time in awarding that title to Sergio.

“He’s been one of the best players on the planet for the last 20 years and doesn’t have much to show for it,” Jacklin said, before dropping this bomb: “Seve [Ballesteros] had more courage in his little finger than this lad.”

Garcia has spent over 20 years playing at the highest levels of the game on the European and PGA Tours, and his trophy case would be the envy of any average Tour pro. In addition to the green jacket hanging in his Augusta National locker, he has collected a total of 10 PGA Tour victories, as well as an impressive 16 titles on the European Tour, good for T14 all-time (the 2017 Masters counts toward both of those figures).

Jackin acknowledges as much in the interview, but his primary contention is that Garcia had the talent to win far more. How much more exactly? According to Jacklin, “he had the ability to win double-digit majors … to think that he’s only won one major as a ballstriker like he is, well, it’s mind-boggling.”

While it might be fair to claim Garcia had the talent to win multiple majors, Jacklin’s figure might be a bit of a stretch. Only three golfers in history have cracked the 10 major mark: Jack Nicklaus (18), Tiger Woods (15) and Walter Hagen (11) (four if you count Bobby Jones’ U.S. and British Amateur titles (13).

Garcia certainly has had his chances at golf’s four biggest events and his list of near-misses at majors is impressive. He finished second at the 1999 PGA Championship and T2 at the 2007 PGA. He did the same at the Open Championship, in 2007 (second) and 2014 (T2). His best finish at the U.S. Open was T3 in 2005, though he finished five strokes behind winner Michael Campbell.

Jacklin, of course, doubled Sergio’s major number with wins at the 1969 Open Championship at Royal Lytham and St. Annes and the 1970 U.S. Open at Hazeltine. The opposite is true for his total pro wins, trailing Garcia with eight career victories in Europe and just four on the PGA Tour.

Over the years, Garcia has occasionally lost his cool on the course during pro events when he game as gone haywire, with a few incidents occurring after his long overdue first major win in 2017.

At the 2019 Saudi International tournament, Garcia was disqualified for damaging several greens by dragging his spikes and slamming his putter in anger during the third round. One day earlier, he had a meltdown after struggling to get out of a bunker on the 5th hole, tomahawking the sand with his wedge four times in quick succession before uttering a string of curse words on his way up to the green.

“I’m sorry to my fans and fellow competitors. What happened is not an example I want to set, and it’s not who I truly am,” Garcia wrote days after the 2019 tournament. “I am an emotional player and while I believe that’s one of my biggest strengths, it’s also one of my biggest flaws. I’m focused on working hard to channel that emotion the correct way and to be the best me, learn from it and move forward. Thanks for all the support.”