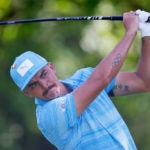 Rickie Fowler tees off during a practice round at Colonial.

Golf fans got to watch superstars mic’d up on the course for two exhibition matches last month, and now they’ll get another taste of it as golf returns at the Charles Schwab Challenge on Thursday.

“Other players have agreed to wear mics, but there’s only certain groups that are within the TV window,” Molly Solomon, an executive producer at Golf Channel, told the Sports Business Journal. “For now, it’s going to be Rickie.”

According to the Sports Business Journal, Fowler wore a microphone during his Wednesday practice round at Colonial Country Club in Fort Worth, Texas, and then reported back saying he was OK with wearing one on Thursday.

Fowler tees off alongside Justin Thomas and Jordan Spieth at 1:55 p.m. ET. Golf Channel will air PGA Tour Live Featured Group coverage from 12-4 p.m. ET on Thursday, and the normal broadcast will be from 4-7 p.m. on Golf Channel.

Mic’ing up players has long been in the conversation to enhance golf broadcasts, and while it’s easy to include in four-player charity exhibition matches like the Seminole Skins Match and the Champions for Charity that featured Tiger Woods, there are more hurdles to leap for regular PGA Tour broadcasts. One of Fowler’s playing partners for the first two rounds, Thomas, said during his pre-tournament press conference that wearing a mic on course isn’t for him.

“What I talk about with [caddie] Jimmy [Johnson] and what I talk about with the guys in my group is none of anybody else’s business, no offense,” Thomas said. “I mean, as close as those mics are on the tees and the greens and as close as I get to boom mics during competition anyway, I basically feel like I am mic’d up. I can’t say some stuff that I usually say anyway, and it is not that it’s bad, but no, if I want somebody to know what I say, I’ll say it in a press conference, I’ll say it in an interview or put it out on social media, whatever it is. But I personally am not one that would care to get mic’d out there.”