ANA Inspiration awash in golf’s biggest names after Round 1 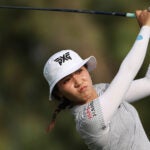 RANCHO MIRAGE, Calif. — On the morning of the first round of the Dinah Shore — or what the golf world now calls the ANA Inspiration — a little after sunrise and a few days since the practice-round temperature touched 116 degrees, there was a most unexpected site: Lydia Ko warming up in a windbreaker. “It was almost chilly,” she said later. “Almost.”

This has already been a Dinah unlike any other, with the traditional early-spring spot on the calendar exchanged for the scorching late summer. With the change of season, Mission Hills has undergone as much plastic surgery as any Palm Springs doyen: 100 fewer trees, a handful of new bunkers and a lot more Bermuda grass, particularly in the shaggier, slower fairways and the long, flummoxing rough. The only constant is the class atop the leaderboard. Ko’s second layer didn’t last long — it was 97 degrees by noon — but she took advantage of the perfect conditions that come with an early tee time to post a 3-under 67. That left her tied with Popovian underdog Xiyu Lin, who last week paid retail for a new set of Mizuno irons, three shots back of leader Nelly Korda.

Tied for second, one stroke back, are In Gee Chun and Madelene Sagstrom. Among the pursuers are big-time talents Danielle Kang and Brooke Henderson (both 4-under), while lurking at -3 is Brittany Lincicome, now the undisputed Desert Queen; with Karrie Webb and Juli Inkster no longer teeing it up here, Lincicome is the only player in the field who has won the Dinah more than once. Among those at 2-under are Lexi Thompson, Anna Nordqvist and Anne van Dam. That’s a lot of appealing players crowded onto one leaderboard, but there is a hard truth to this collection of protagonists: All but the easygoing Lincicome and Chun, a two-time major champion and prolific winner in Korea and Japan, have a little something to prove.

Henderson, whose 23rd birthday coincided with the first round, has a chance to silence critics who contend her hyper-aggressive style does not translate well to the more exacting conditions of the major championships. Her surprise win at the 2016 Women’s PGA Championship seemed like an epochal moment but, while she has eight LPGA wins, Henderson has contended to the bitter end at only one other major. Following the first round, the birthday girl said she has no plans to take her foot off the gas.

Kang, 27, has been the hottest player on tour since the LPGA restarted after the coronavirus necessitated a 166-day break, winning back-to-back events last month. The first, much-anticipated victory of her career was a major (the 2017 Women’s PGA), and this ambitious and hypercompetitive player burns to be a consistent force in the events that mean the most. She is trying to get there by caring a little bit less.

“My main focus on every shot is execution and on how I’m going to hit the shot,” she says. “I’m trying not to be so result-based anymore. Every golf tournament I play and compete in, I want to do the best I can, and I don’t think that will differ just because it’s a [major]. Week in, week out, I try to prepare the best I can and play the best I can possibly play and see where I end up. That’s just kind of my mentality lately.”

This week she has the added bonus of bunking with her mom, Grace Lee,  who is cooking Danielle’s favorite Korean dishes and providing boisterous on-course support. On the par-3 5th hole on Thursday, Kang nearly dunked a 5-iron and her mom’s giddy play-by-play was loud enough to be clearly heard on the broadcast: “Get in the hole! Get in, get in, ohmygawd!”

Thompson has long been the Dustin Johnson of the women’s game — an awesome physical talent with an uncluttered mind. Like DJ, her one major championship victory has been overshadowed by serial heartbreak, in her case a dozen top-10s in the major since Thompson’s breakthrough at the 2014 Dinah, when she was a tender 19 years old. Winless over the last 15 months, Thompson has reinvented herself for this Dinah with a new putter (hello, SIK), new putting grip (goodbye, claw), new caddie (welcome, veteran John Killeen) and new/old swing coach (she has returned to her OG, Jim MacLean).

On Thursday, Lexi was asked what she has learned from all of her near-misses, including the 2017 heartbreak at the Dinah when she was leading by three strokes with six holes to play only to be hit with four penalty strokes from a ball-marking snafu the day before. “I think with golf, in general, unfortunately, you struggle more than you win,” she said, “but you learn from the failures and what you did wrong, so that way when you’re in that position the next time you can learn from it and you know what to do.”

This is Sports Psychology 101. Asked to plumb the depths a little deeper, to identify any regrets or remorse, she flatly refused: “No. I’m here today. That’s all that matters.”

Ko is another battle-scarred survivor. Few players have ever made the game look easier than the free-swinging, teenaged Ko. She is the youngest woman to win an LPGA event (15 years, 4 months); youngest to reach world number one (17 years, 9 months); youngest to win a major championship (the 2015 Evian at 18 years, 4 months, thanks to a magnificent Sunday 63); and youngest to win two majors (18 years, 11 months) when she took the 2016 Dinah. But endless changes to her swing, equipment and caddies have robbed Ko, 23, of her insouciance and some of her gift.

It’s now been more than two and a half years since her last win, and at the Marathon Classic, a month ago, she suffered a brutal defeat, double-bogeying the final hole to hand the win to Kang. Ko remains such a sweet, likable, down-to-earth presence that the pain was palpable across Golf Twitter on that Sunday evening. Ko largely avoids Twitter — smart cookie — but she felt the warm embrace of those who are eager to see her recapture the old magic.

“A lot of people reached out to me, some of my closest friends on Tour, they messaged me, and just people like fans they tried to send me DMs. I felt like I got a lot of support. Somebody told me that I’m not the first player to do that, and I’m definitely not going to be the last to do it, either. But I think all that aside, I was just excited to be back in contention and just to be able to play solid again.”

Poignantly, Ko admits to watching old highlights of herself, but she has a hard time relating to the savant on the screen. “It feels like such a long time ago,” she says. “So many things have happened between then and now and through all the experiences and everything. I’m never going to be the same person as then. All I can do right now is just be the best version of myself, and I feel like I’m working on the right things and doing the right things, and when I keep doing that, the game will sort itself out. I kind of believe in the process and just see where the current takes me.”

Like a river flowing inexorably to the sea, one player is destined to wind up in the bracing waters of Poppie’s Pond on Sunday afternoon. The eclectic cast of characters that dominated the first round are testament to just how hard it can be to earn the right to take that plunge.