Tour Confidential: Is Dustin Johnson the runaway Player of the Year? 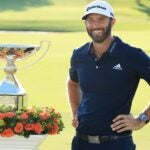 Dustin Johnson made his case for Player of the Year with a dominant stretch to close out the year.

Check in every week for the unfiltered opinions of our writers and editors as they break down the hottest topics in the sport, and join the conversation by tweeting us @golf_com. This week we discuss Dustin Johnson’s case for Player of the Year, the FedEx Cup format, the ANA Inspiration, and more.

1. Dustin Johnson won both the Tour Championship and the FedEx Cup at East Lake on Sunday, capping a blazing end to the season. Johnson won three times in 2019-20 (the Travelers and the Northern Trust were his other two titles). Can anyone else make a case for the Player of the Year?

Josh Sens, senior writer (@JoshSens): Well, Justin Thomas won three times and Brendon Todd won twice while seeming to be in the mix nearly every week. But DJ did what Sugar Ray Leonard used to do: finished with a flurry. This one goes decisively to him.

Zephyr Melton, assistant editor (@zephyrmelton): You could make a compelling case for JT or even Collin Morikawa, but the heater DJ went on over the last month of the season gives him the edge. If he keeps it up, he could take the early lead in next season’s race with a win at Winged Foot in a couple weeks, too.

Sean Zak, senior editor (@sean_zak): Nope! It’s DJ all the way. Thrilled he did it toward the end so we could be swayed even easier.

James Colgan, assistant editor (@jamescolgan26): Sens is right, what about Brendon Todd? Or was he a better fit for POTY at the season’s 54-hole mark than at the end? Jokes aside, it’s gotta be DJ. No question about it.

Michael Bamberger, senior writer: His only real competition is Jay Monahan, who isn’t of course a player but was the most significant figure in getting this odd golf year back in action.

2. Perennial question but needs to be asked, given Johnson didn’t need to post the lowest 72-hole score to claim the Tour Championship under the handicapped scoring system (Xander Schauffele’s 265 was four better than Johnson’s tally): Does the current FedEx Cup format have it right? If not, how would you improve it?

Sens: I know a lot of careful, number-crunching thought went into it, but giving a professional golfer a head start at the beginning of a tournament is too absurd for me to accept. This isn’t a weekend club competition. Get rid of the handicapping.

Melton: I’m not sold on the current format. I know it makes viewing more friendly for the casual fan, but the lack of contenders as a result of the handicapped leaderboard can make it a bit of a snoozer. Incorporating some sort of match-play component to determine the FedEx Cup champ could be a fun twist that still allows for the casual fan to easily comprehend.

Zak: Stroke play for two days, then match play for two? Feels like we all want that. If we need to give the season a bunch of value, allow for FedEx Cup ranking to guarantee a spot in match play.

Colgan: I love the idea of incentivizing strong performance, but I think — as my colleague Josh Berhow pointed out last week — the best way to do that is to shift to match play. This weekend was a great proof of concept for how beneficial it is to start a tournament at 10 under, but it was decidedly not a great proof that doing so manufactures compelling golf. It’s time for match play.

Bamberger: I’ve been down this road before: play all three tournaments, winner is the winner of one 216-hole event. Cut players after each round.

3. When you look back at this unusual, truncated, one-major, fan-free 2019-20 season, what will be your defining memory or takeaway?

Sens: Hard to top the surreal nature of the season shutting down. But on a happier note, that drive Morikawa hit on 16 at Harding to put away the PGA Championship. Cold blooded, and etched forever in my mind.

Melton: The week sports shut down will forever be a remember-where-you-were moment for me. Seeing everything go from (seemingly) normal to a complete standstill was jarring to say the least.

Zak: That golf somehow stood alone as a sport that can do just fine during a pandemic. The sport shut down and came back strong with minimal cases. And it was entertaining!

Colgan: For me, it’d be hard to top the scene on Thursday at the Players Championship. The 12 hours from full tournament, to no fans, to the tournament (and season) postponed felt like something out of a textbook.

Bamberger: Dustin Johnson on the range on Saturday night at Memorial, a day after shooting 150 and missing the cut by a bunch. I couldn’t imagine what he was doing there at that hour, on that day. I couldn’t imagine what he was thinking about or how he would play for the coming months. Golf is play, as Dan Rooney said last week, on a razor’s edge.

4. The second major of the LPGA season kicks off this week, the ANA Inspiration. World No. 1 Jin Young Ko, who is sheltering in place at home in Korea, will not be in the field but otherwise the tournament is stacked. What story line are you most excited to see play out?

Sens: Danielle Kang has been on such a great run of late. I’m keen to see if she can nab another major. But, as I always do, I’m rooting hardest for Lydia Ko.

Zak: Going to keep beating this drum: would be great to see Nelly Korda win a major.

Colgan: It was 120 degrees on Sunday in Rancho Mirage. For all the individual storylines, I’m most interested to see how the pros fare in a high-stress, ridiculously high-heat scenario. Maybe they’ll be unaffected by it, but I certainly wouldn’t be.

Bamberger: All great calls and I’ll add to that this: This is a great moment for the women to really have the stage to themselves, between the Tour Championship and the U.S. Open. I hope people turn it on in droves.

5. Kevin Kisner said before the Tour Championship that he would give a 12 handicap 68 strokes over four rounds if they were to play a match. “Four times 12 is 48, and if I’m a plus-four, that’s 20 more. That’s 68,” he explained. Sound about right to you?

Sens: Kevin Kisner as a plus-four? That doesn’t sound right. If he were to play routinely on the same course and the same set up as that 12 handicap, I wager his true index would be closer to plus seven or eight. In short, he’s still not giving enough strokes.

Melton: Josh is correct in his skepticism of Kisner’s handicap. I think Kisner would need to be giving a 12-handicap closer to 100 strokes to make it fair at East Lake in Tour Championship conditions. No way a 12 can handle the setup these guys got this week. Seems like he’s sand-bagging a little bit.

Zak: Zephyr is right. The hazards and O.B. would catch up to a 12-handicap real quick. Also, 12-handicappers are, by definition, not great putters. Greens truly Stimping at 12-13 would lead to countless three-putts.

Colgan: I’ve never been particularly good at math, but 68 strokes feels a touch light for a battle between my dad (a 12-handicap) and Kevin Kisner. As Z pointed out, 100 might be better, but even that might not be enough.

Bamberger: From what tees? How long is the 12 handicapper? If the course is long and the am is short, 72 shots — a stroke a hole — won’t be enough.

6. In a piece on GOLF.com, Michael O’Keefe, the actor who played Danny Noonan in the legendary golf movie “Caddyshack,” informed the golf world that he’s seeking a bag next week at the U.S. Open. Whose bag would most like to see Noonan land on?

Sens: In that case, how long before he breaks into his Carl Spackler impression? So the lama’s gonna stiff me … Failing Kuchar, I would want to see him with a chatterbox, someone who would give us lots of player/caddie interaction. Jordan Spieth? Phil Mickelson? And when Phil tried pulling driver on 18, O’Keefe could tackle him for comic effect.

Melton: Let’s see him hop on Matt Kuchar’s bag. He’s in need of a looper, after all. Really if he gets on anyone’s bag, it will be a fun storyline to follow. Here’s to hoping.

Zak: Spieth! Haha I hate to saddle Jordan with a rookie caddie but I think we’d see just how much he might be in his own way.

Colgan: Justin Thomas has had more success than anyone this year playing without his typical caddie, and his personality feels like a natural fit with Noonan’s cadditude.