Inside Lexi Thompson’s warmup routine at the ANA Inspiration 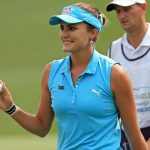 Prior to her second round at the ANA Inspiration, GOLF.com shadowed Lexi Thompson to observe how a pro prepares before the round.

RANCHO MIRAGE, Calif. — A good warmup is key if you want to play well from the get-go. Rolling from the parking lot to the first tee might be ok for your average hit and giggle, but for competitive golf, you need a solid warmup.

There’s no better place to learn how to warm up than at a professional event. Every player has their own unique routine that they stick to and it’s fascinating to see how it differs from player to player.

Some players are strictly regimented — launch monitors and an entourage aiding them through the process — while others are far less stringent. It all comes down to what works best for each individual.

Before the second round of the ANA Inspiration, I decided to shadow one of the top players in the women’s game in Lexi Thompson to observe what her warmup routine was like. Here’s what I saw.

Thompson’s tee time for the second round was 12:44 p.m. and she arrived at the course an hour and a half before her round. The first thing every player has to do when they arrive this week is go through Covid protocols — a temperature check and questionnaire — before being permitted on the grounds.

After clearing the mandatory Covid protocols, Thompson headed to player dining to grab lunch. This week player dining is right next to the range. She headed over with her caddie and father and ate in the open-air build constructed for the tournament.

Fueld up and ready to go, Thompson headed to the chipping green. Some players will warm up with multiple wedges and from multiple areas, but Thompson’s routine was much simpler. She stuck with one wedge and hit balls from one area. She worked on short and medium range pitches and experimented by altering trajectories.

Next, Thompson headed to the range to warm up through her bag. She started by taping some of her fingers, and then did some quick stretches to loosen up.

Thompson started with some pitch shots with her wedges and then graduated to full swings. You will see many players on the range trying to dial in their wedges and other clubs with launch monitors before they tee off, but Thompson relied all on feel.

That was a similar theme throughout the bag. Thompson didn’t seem too concerned with getting every club down to an exact number, and instead was focused on getting a feel for her swing. She wore headphones throughout and didn’t chat with her caddie much as she went through the process.

An interesting note: Thompson did not hit any fairway woods or hybrids off the turf, she only hit them off the tee. This could be a product of the way she plans to manage the course this week, laying up on par 5s, or she may not even need a wood or hybrid to reach the par 5s in two.

Thompson’s putting warmup was a bit more regimented than her range session. She began by rolling a few one-handed putts (something Tiger Woods incorporates into his warmup routine) and then measured out what appeared to be a 4-foot line to the hole.

Thompson rolled several 4-footers normally, and then placed tees on either side of the putterhead, making a gate. This gate drill is an effective way to check your stroke and make sure it’s on the proper plane.

Next, she rolled lag putts to dial in her speed and get a feel for the greens. This part of the warmup was less exacting than her 4-footer routine. She used two balls and rolled them at holes of various distances. Just before her tee time, she rolled a few more short putts.

With seven minutes to spare, Thompson headed to the 1st tee for her tee time with Brittany Lincicome and So Yeon Ryu.