Inside Patty Tavatanakit’s warm-up routine at the ANA Inspiration 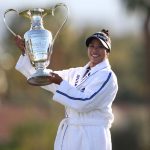 Patty Tavatanakit played the best round of her life at the ANA Inspiration.

RANCHO MIRAGE, Calif. — When Patty Tavatanakit arrived at Mission Hills on Sunday, she knew she was 18 holes from history. A win would represent her first LPGA victory — major or otherwise — in the 50th playing of the ANA Inspiration. Much was at stake.

Before she could begin her march toward history though, Tavatanakit had to go through an essential part of any successful round — the warmup. Warming up is always important, but when you’re warming up before a major championship, it’s absolutely essential.

GOLF.com followed Tavatanakit as she warmed up before the most important round of her life at Mission Hills on Sunday. Here’s what it was like.

Tavatanakit arrives for her 1:45 p.m. tee time about an hour and a half prior, clears covid protocols and then heads to player dining. She eats with her caddie as the two fuel up to take on an oppressive desert heat that would reach triple digits.

After her brief lunch, Tavatanakit heads to the practice putting green. She finds a relatively flat and straight putt and rolls a few six-footers.

Once the putt is confirmed to be straight, she goes to her bag and pulls out a Dave Pelz putting tutor. The aid is designed to improve start lines and face path. Tavatanakit rolls a few putts through the small marble gates to make sure she is starting her putts on line.

Next, she pulls out a string chalk line and makes a line on the green from her ball to the hole and rolls putts down this line from various distances. Then, it’s on to lag putting.

Tavatanakit rolls lag putts across the green both uphill and downhill. She tries to two-putt each and, on this day, she’s mostly successful. She then hits three-footers with the proper alignment.

The putting green has a sign that says, “no chipping,” but when Tavatanakit pulls out a wedge, no one stops her. She hits a few short chip shots to gauge her feel on the shorter chips.

Tavatanakit goes to the chipping green and starts hitting longer chip shots. This portion is by far the shortest part of her routine.

Tavatanakit gets to the range and the first thing she does is stretch with a resistance band. When she’s good and loose, she starts with hitting some pitch shots off one foot to practice balance. She then hit some one-armed pitch shots, which helps promote proper sequencing and club release through impact.

Her preferred ball flight is a draw, and through most of her warmup with full shots, she’s shaping the ball to perfection. Tavatanakit doesn’t rush through any portion of this routine and takes her time before hitting each ball.

Unlike some players, Tavatanakit does not spend a ton of time hitting full shots on the range. Her routine is much more abbreviated than some players, and only lasts for about 20 minutes.

With 20 minutes before her tee time, Tavatanakit goes back to the putting green and rolls various putts to work on her feel. Unlike the first time she’s on the putting green, she does not spend any time worrying about technique. This time is all about working on her feel before she gets on the course.

With 10 minutes left before her tee time, Tavatanakit makes the short walk to the 1st tee. She exchanges pleasantries with her playing partner Ally Ewing, gets her scorecard from the starter and gets ready to embark on the most important 18 holes of her life.

When it’s her turn to hit, she makes a practice swing, takes a deep breath and laces one down the fairway.