3 things to know about Round 2 at the ANA Inspiration 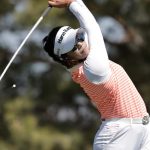 RANCHO MIRAGE, Calif. — We’ve reached the midway point of the 2021 ANA Inspiration, and things are (literally) heating up. After mild temperatures early in the week, the heat has arrived in the desert and is expected to stay throughout the weekend.

With the cut made and pairings set for Saturday, we are on the back half of the tournament, but there is still plenty of golf to be played.

Here are three things you need to know about Round 2 at the ANA Inspiration.

Patty Tavatanakit will sleep on the lead for the second consecutive night. After opening with a 66 on Thursday, the 21-year-old backed up that round with another under-par performance on Friday. She posted 69 in the afternoon wave and holds a one-stroke lead over Shanshan Feng.

“[I] just kept pedaling, grinding out there,” Tavatanakit said. “There was a lot of struggle, but I embraced it.”

Tavatanakit is looking for not only her first major championship win, but also her first win on the LPGA Tour. She will be in the final pairing on Saturday with Feng , and the duo will tee off at 1:45 p.m. local time.

International players have dominated play thus far at Mission Hills. Of the top 20 players on the leaderboard, 19 are internationally born. Christina Kim is the lone American in the top 20 at four under.

Just outside the top 20, however, is a cohort of Americans looking to get back into contention. Nelly Korda, Jeniffer Kupcho, Danielle Kang, Lexi Thompson and Gerina Piller are all inside the top 40 and could get back into the conversation with a solid moving day.

If an international player were to win, it would be the 14th-straight major with a foreign-born winner. The last American to win a major was Angela Stanford at the 2019 Evian Championship.

Despite an encouraging opening round at Mission Hills, Michelle Wie West was not able to parlay that momentum into another solid round. The former U.S. Open winner posted 79 in Round 2 and will miss the cut at a major in her first start since 2019.

Wie West did not make a birdie on the day and registered seven bogeys to fall from comfortably inside the cut line to near the bottom of the leaderboard by day’s end. Her 79 was tied for the second-worst round of the day.