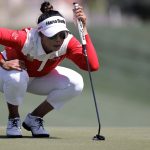 Patty Tavatanakit is in total control of her game at Mission Hills. The result is a five-stroke 54-hole lead at the year's first major.

RANCHO MIRAGE, Calif. — Patty Tavatanakit is in total control of her game, and Mission Hills Country Club is no match.

The rookie has never won an LPGA event in her short career — much less a major championship — but the way she’s playing, you’d swear she’s a seasoned vet. Tavatanakit has seldom missed a shot this week at the ANA Inspiration. Her scorecard tells all you need to know.

Tavatanakit has played 54 holes. She’s bogeyed just four of them. Two of those came in Round 3 as the 21-year-old battled intense heat and blustery winds. It didn’t matter. She built a lead from one coming into Saturday to five by day’s end.

“She’s an amazing player,” Shenshen Feng said of her playing partner. “I actually learned a lot from her … [But] it was hard to keep up with her.”

If she can replicate that success tomorrow, an ice-cold plunge into Poppie’s Pond awaits.

“It’s a great day,” Tavatanakit said after her round. “[But] it’s in the past now. All I can think about is what can I do tomorrow, what can I improve from today’s round? I was getting a little tired at the end. What can I do to keep my energy level up throughout the day tomorrow? That’s going to be my goal.”

Throughout most of the third round, Tavatanakit was unflappable. She began with three straight birdies and added another at the 9th. She etched three more circles on her card by No. 15 to open her lead to six. Then, fatigue set in.

Tavatanakit pulled her approach into the bunker on the par-3 17th leading to a bogey and then hit an uncharacteristically poor wedge that came up short of the island-green 18th. But like Fred Couples at the ’92 Masters, the ball just stayed on the bank. Tavatanakit saved par to sign for 67 and keep her lead at five over Ally Ewing and 2020 ANA champion Mirim Lee.

The former UCLA Bruin has plenty of experience sleeping on large leads. At the mouthful of an event that is the Symetra Tour’s Danielle Downey Credit Union Classic in July 2019, Tavatanakit also had a five-stroke lead heading into the final round. She took the title the next day by seven.

Also — unlikely as it may sound — this isn’t even the largest lead Tavatanakit has held at this course. She remembers an event here in her junior days when she was the frontrunner by 10(!) in the desert, which she went on to win.

But this is different — this is a major championship. Everything is bigger at the ANA. The stakes. The history. And the nerves.

A five-shot advantage is no guarantee. At the last major of 2020, A Lim Kim lagged five shots behind Hinako Shibuno’s 54-hole lead. Less than a day later, Kim was a major champion.

“[I’ve got to] keep pedaling,” Tavatanakit said. “It’s not over yet. Anyone could do something incredible tomorrow. Everyone has the capability to go out there and shoot low scores. You can’t get ahead of yourself there. There’s a lot of golf left.”