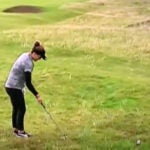 Toward the end of her first round, and in brutal playing conditions at Royal Troon, Thompson had missed her tee shot out to the right on the par-5 16th. Her ball rolled right up against a tuft of fescue grass, making it tricky to get the clubface clean on the ball.

After sizing up the shot, Thompson very clearly used the clubhead to touch the grass, pushing it away from her ball. Was it an intentional move to improve her lie? That’s what most commenters on social media determined.

Thompson touched the grass that way twice before eventually striking her shot. She went on to make birdie on the hole for the only circle on her scorecard Thursday.

But did she improve her lie? The R&A decided that she did not, and clarified the ruling in a statement:

“Following a discussion between Chief Referee David Rickman and the player prior to her signing her scorecard it was determined that, although the player had moved a growing natural object behind her ball, it had returned to its original position.

“Therefore, the lie of the ball was not improved and there was no breach of Rule 8.1.”

There you have it. Rule 8.1 restricts what a player may do to improve any of the “conditions affecting their stroke. Read more about that specific rule here. Thompson shot 78 in the first round and followed that up with a 75 Friday to miss the cut.