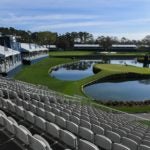 Grandstands stood empty at the Players Championship when the coronavirus outbreak caused the event to be canceled after one round. Now the Tour is back.

Three months ago, in what now seems like another lifetime, the 2019-20 PGA Tour season was put on hold. With play set to resume at the Charles Schwab Challenge in Fort Worth this weekend, here’s a refresher on notable moments that transpired before the shutdown. You’re forgiven if they’d slipped your mind.

1. Chile today, hot over the weekend

With a closing 6-under 64, then 20-year-old Joaquin Niemann ran away with the season-opening Greenbrier Classic, becoming the first player from Chile to win on the PGA Tour, and just the third foreign-born player to capture a Tour title before age 21 (Rory McIlroy and Seve Ballesteros were the others, if you’re keeping score at home).

2. Curry, Lefty and a long-hitting Champ

Steph Curry and Phil Mickelson were wine country’s highest profile pairing when they teamed up in the pro-am at the Safeway Open, in Napa, Calif. Come Sunday afternoon, though, the spotlight fell on Cameron Champ, who birdied the last to clinch the title, then broke down in tears while dedicating the win to his cancer-stricken grandfather, Mack.

Justin Thomas’s win at the CJ Cup, in Korea, was his second in three trips to the event, and his 10th Tour victory since the start of the 2016-17 season, the most of any player in that span. Two months later, Thomas added another with a playoff win at Kapalua.

4. Another one for Woods

The career major mark may be the record he wants most. But this one was nothing to sneeze at either: with a victory at the Zozo Championship in Japan, Tiger notched his 82nd career Tour win, tying him atop the ledger with Sam Snead.

As autumn brought cool weather across much of the country, Brendon Todd got hot in the tropics, claiming titles in back-to-back starts in Bermuda and Mexico.

At the Mayakoba Classic, Matt Kuchar was defending champ. But he no longer sounded tone-deaf and defensive in response to questions about the caddie-tipping controversy that had clouded his victory in 2018. “I’ve tried to use this opportunity to learn from mistakes, to grow, to try to learn and be better,” Kuchar said on the eve of the event. By then he made amends, both personal and financial, with David (El Tucan) Ortiz, the fill-in looper whom many felt he’d stiffed the year before. He’d also donated to local charities.

7. A villain at the Hero

Patrick Reed improved his lie but not his less-than-beloved reputation when he cleared sand from behind his ball with two suspicious backswings at the Hero World Challenge. Reed was assessed a two-shot penalty, but the more serious slap came in the form of widespread condemnation from fans, players and pundits alike. Brooks Koepka, Brandel Chamblee and Peter Kostis were among those who branded Reed a cheat.

The act was brazen, and the punishment swift. Two months before the Hero, and a half a world away, a different misdeed carried different repercussions, when South Korean golfer Bio Kim was suspended for three years by the Korea Professional Golf Association for flashing his middle finger in response to a cell phone camera that clicked in his swing. Kim’s sentence was later reduced to one year.

Justin Thomas was clutch. Tiger Woods was cold-blooded as player-captain. And Sung-jae Im never missed a shot. The most riveting Presidents Cup in years saw no shortage of sparkling performances from both sides, but the venue, Royal Melbourne, might have come away as the biggest star.

For all the heckling and headline rebukes, at least one man has seemed largely unbothered by the storm of controversy surrounding Patrick Reed. Ladies and gentleman, we give you the winner of the 2020 World Golf Championships-Mexico: the Tour pro known to some as “Table for One.”

With other major sports already on hold, golf pressed forward — until it didn’t. On March 12, with one round of the Players Championship in the books (Hideki Matsuyama led after a course record-tying 9-under 63; defending champion Rory McIlory was nine shots back), the PGA Tour decided to scrap the event along with the next three scheduled tournaments. Not a single shot has been struck in a Tour event since.