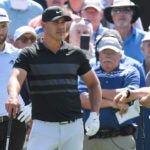 From left, world No. 2 Jon Rahm, No. 3 Brooks Koepka and No. 1 Rory McIlroy will play together at the Charles Schwab Challenge.

Three close friends will all be close to each other.

The featured groupings, released Sunday in advance of this week’s first and second rounds of the Charles Schwab Challenge, the PGA Tour’s first tournament after a three-month hiatus due to the coronavirus, feature plenty.

There’s the rankings group. No. 1 Rory McIlroy, No. 2 Jon Rahm and No. 3 Brooks Koepka are all paired together, reuniting the threesome that played together during the Tour’s last completed round, the Players Championship in mid-March. (But not a rivalry group, at least according to Koepka. “I’ve been out here for, what, five years. Rory hasn’t won a major since I’ve been on the PGA Tour. So I just don’t view it as a rivalry,” Koepka told the AFP. “I’m not looking at anybody behind me. … I’m No. 1 in the world. I’ve got open road in front of me and I’m not looking in the rearview mirror, so I don’t see it as a rivalry.”)

There’s the fitness group. Bryson DeChambeau will be bulked up since the Tour’s last round. Dustin Johnson once received a headline in Men’s Journal entitled, “How Dustin Johnson Became the Fittest Man in Golf.” Justin Rose, no slouch himself, is the third member of the grouping.