Why Tiger Woods and Phil Mickelson feel your video-conferencing pain 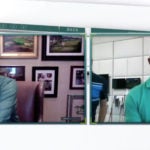 Tiger Woods was not alone during his video call with Jim Nantz.

Tiger Woods was camera-bombed. Brooks Koepka, too. By a dog.

McIlroy and Phil Mickelson were notification-bombed.

As Woods, Koepka, McIlroy, Mickelson and all of golf learned to stay at home the past three months due to the coronavirus pandemic, they, too, like most of us, learned to use video calls. Send the invite, receive the invite, start the call over a phone or computer.

In a recent ad, CBS showed some of the education.

The network has filled the past few months without golf with broadcasts of old golf tournaments. Players have helped with commentary. Woods talked about the Masters. Mickelson, too. Koepka reviewed the PGA Championship. All over video calls.

“Funny, right after … “ Koepka says as his dog, Cove, walks in next to him.

McIlroy appeared to have dialed in during Nantz’s second meal of the day.

“Hello, Jim. I just did the same thing as you,” McIlroy says as Nantz wipes his face with a napkin. “Just finished lunch.”

McIlroy was also dialed up during the broadcast.

To McIlroy’s right, his cellphone chimed twice at one point.

“Do not disturb,” McIlroy says as he touches his phone.

Mickelson appeared to try to help Nantz with his phone.

“Yeah, or go to notifications and just turn it off,” Mickelson said.

The ad ends by saying that golf is returning this weekend. No more videos.

“I’m very excited just to get back and play golf,” McIlroy said.