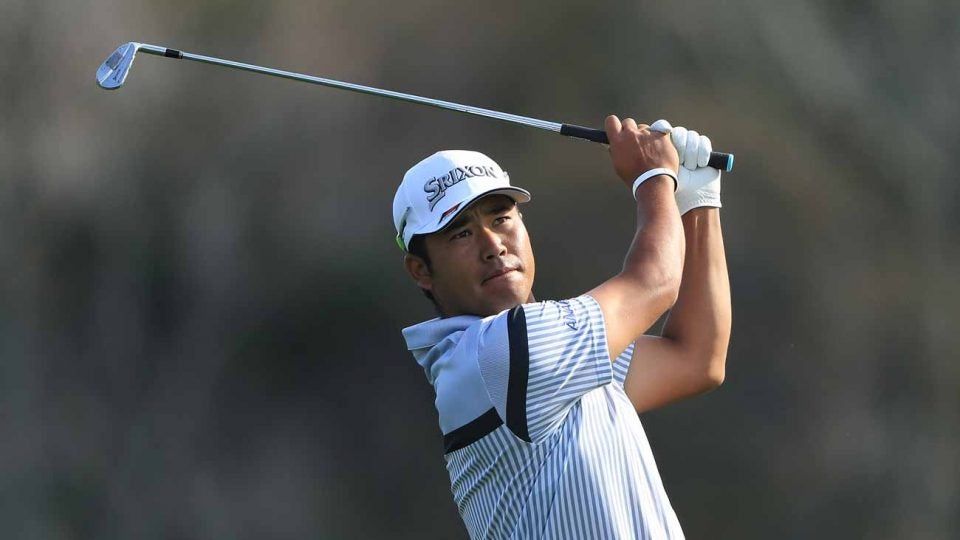 Hideki Matsuyama hits a shot during Thursday's first round of the Players Championship.
Getty Images

Just minutes after it was decided to play the Players Championship and the following three tournaments without fans due to the outbreak of the coronavirus, Matsuyama finished a TPC Sawgrass-record-tying 63 on Thursday, just hours before it was then decided to cancel all of those rounds.

Just hours after it was decided to play the tournament as scheduled as sports organizations across the country decided to either cancel or suspend their games, Matsuyama stood at the practice range uncertain of how the day would go. It took just one hole to tell him.

He made four straight birdies to start his round. Four more on the back. His last stroke winded its way over 25 feet on the par-5 ninth hole before winding up in the bottom of the cup, giving him an eagle 3, the 9-under 63 and a two-stroke lead over Harris English, Christiaan Bezuidenhout and Si Woo Kim after the first round.

Here’s everything you missed from Thursday’s action in Ponte Vedra Beach, Fla.

Perhaps the most impressive part of Matsuyama’s round was his 25 putts, four better than his average this season entering the round.

“I’ve had a lot of good advice from a lot of close people on our team and I’ve been feeling good about my stroke and today they went in,” he said.

What happened with some of the other big names?

Among some of the other bigger names, Brooks Koepka, Bryson DeChambeau, Dustin Johnson and Adam Scott shot 2-under 70s, Justin Thomas and Sergio Garcia fired 1-under 71s and Rory McIlroy shot even-par 72, as 97 players shot par or better.

Among those over par were Patrick Reed at 1-over 73 and Phil Mickelson and Jordan Spieth at 3-over 75.

Tiger Woods’ pursuit of the PGA Tour’s all-time wins record will have to wait at least until the Masters, as he was taking off a fourth-straight week because of a sore back.

The rest of the Players Championships and the next three tournaments are cancelled. The next one after that is the first major of the year, the Masters.