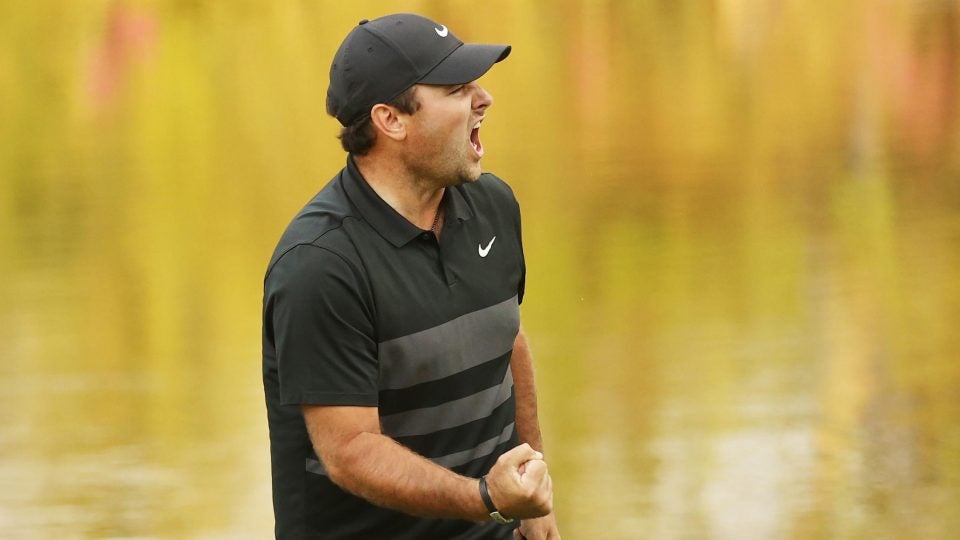 Patrick Reed picked up his eighth PGA Tour win thanks to a clutch birdie on the 71st hole.
getty

His ball dropping into the cup on the par-3 17th hole, Patrick Reed let out an emphatic scream. He triple fist-pumped. He turned to the large seating area surrounding the hole at the World Golf Championships-Mexico Championship and yelled and fist-pumped a few more times.

After a week in which a fellow player criticized Reed’s waste-bunker incident last December as “building sand castles” and a former commentator relayed that he had seen him commit multiple rules violations, it all bubbled out of Reed in the most vociferous way possible.

The birdie on the 17th was Reed’s third in a row, helped him survive a bogey on the 18th and gave him a one-shot victory over Bryson DeChambeau, good for Reed’s eighth career victory.

“It’s very rewarding,” Reed said on the NBC broadcast. “My team and I have worked so hard through the end of last year and the beginning of this year. We feel like we were playing some good golf and we weren’t quite able to get over that hump. … At the end of the day, just putting yourself in these positions on Sunday is unbelievable and it’s a great feeling and I can’t wait to get home to celebrate with the little ones and my wife and bring home the trophy.”

Here’s everything you missed from Sunday’s action in Mexico.

Electric.@PReedGolf birdies the 17th and takes a 2-shot lead to the final hole at @WGCMexico.#QuickHits pic.twitter.com/EGYR6LTtQi

Reed’s late binge sealed it. His birdie on the 15th and DeChambeau’s bogey at the 17th put them in a tie at 17 under. Reed’s next two birdies gave him a two-stroke lead heading into the last — which he needed after hitting his tee shot way right before recovering for a bogey and an 18-under-266 total.

It caps a long week. On Monday, SiriusXM host Sway Calloway hosted a “special town hall broadcast” in Oakland in which he asked Brooks Koepka, among other things, whether Reed cheated at the Hero World Challenge. Reed was assessed a two-stroke penalty for improving his lie in a waste area, and the ruling came only after Golf Channel cameras captured Reed brushing away sand from behind his ball with two practice swings.

“Uh, yeah. I think, yeah — yeah,” Koepka said. “I mean, I don’t know what he was doing, building sand castles in the sand, but, you know, you know where your club is.”

Kostis added on, saying on the No Laying Up podcast he’s seen multiple instances of Reed committing similar rules violations.

Reed had barely responded — until Sunday.

Bryson's on a roll.@B_DeChambeau leads by 2 at @WGCMexico after his 8th birdie of the day at No. 14.#QuickHits pic.twitter.com/6GbII0jxCD

For a while, it was looking like DeChambeau’s tournament. Birdies on 9, 10, 11, 12 and 14 put him at the top, but the bogey on 17 proved costly, and he finished with a six-under 65, still good for the second lowest round of the day.

Three strokes behind Reed were Jon Rahm, who followed Saturday’s sizzling 61 with a 67, and Erik van Rooyen, who shot a 70.

What happened to Justin Thomas?

Justin Thomas entered the round with a one-shot lead and looked good with a birdie on his first — but a double bogey on the 10th and bogeys on the 3rd, 7th, 8th and 13th doomed him and led a 73.

The double bogey was not without a bit of flair. With his drive nestled against a tree on the par-4 10th, the right-handed Thomas was forced to go lefty. He took three southpaw swings. And punched it out 40 yards through the trees.

Goosebumps! Thank you Mexico for making this such a special week. Can't wait for next year! @WGCMexico 🇲🇽💚

The lone Mexicans in the field, Abraham Ancer and Carlos Ortiz took advantage of the home-crowd support, with Ancer tying for 12th and Ortiz tying for 16th.

Ancer capped the week on the stadium-like 17th by high-fiving fans as he walked to the green — where he one-putted for birdie.

Tiger Woods’ pursuit of the PGA Tour’s all-time wins record will have to wait at least another week, as he took the week off.

The PGA Tour begins its Florida swing with the Honda Classic in Palm Beach Gardens, Fla. Keith Mitchell is the defending champion.