At the Presidents Cup, one thing is certain: Royal Melbourne will be the star of the show 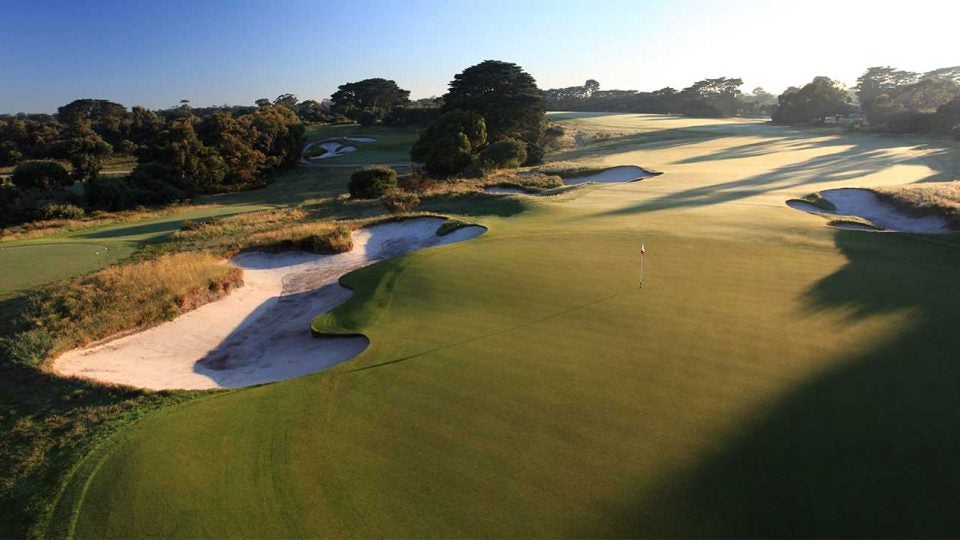 A view of the 4th hole at Royal Melbourne's West course.
Gary Lisbon

How good is Royal Melbourne? Nick Faldo, the persnickety Englishman, once said,”The West Course might just be the best golf course in the world. Period.” Yet the Composite Course being used for this Presidents Cup is even better, cherry-picking six of the best holes from the East Course, which is tighter and tougher. The West features the gorgeous bunkering and flummoxing greens of the good Dr. Alister MacKenzie. The East was built by Alex Russell, the champion of the 1924 Australian Open who studied under MacKenzie.

For the Cup, competitors will play, in order, holes 3-7, 10-12 and 17-18 of the West, then 1-3 and 16-18 of the East, finally culminating on 1 and 2 of the West. The two courses are so unified in their strategic design and rustic beauty that the casual fan will never notice when play switches between the East and West. What will be graphically evident is the quality of playing field, beginning with the very first hole, a short, dangerous par-4. Tiger Woods drove the green of this 354-yard dogleg left in a practice round at the 1998 Presidents Cup, but bogeys will be just as common as birdies with a green that slopes perilously front-to-back.

Like MacKenzie’s Augusta National, Royal Melbourne’s primary defense is the wicked greens. Of a long-ago Australian PGA, Sam Torrance said, “I had a 15-foot putt and I smoked normal cigarettes then — not rollups — and I threw [my cigarette] down on the green and the next thing it’s rolling right down the green. They were the fastest greens I have ever seen.” Tom Watson, after winning the 1984 Australian Open, said, “Those greens scared the daylights out of me.” With modern agronomy, they have only gotten firmer and faster.

After the tricky opener, play moves to one of the great three hole stretches in golf. No. 2 on the Composite is a 507-yard par-5 featuring the most dramatic drive on the course, playing over and around a towering sand hill, with a greedy bunker at the crest of the hill. The risk-reward continues on the second shot. Expect plenty of early fireworks here. Then comes an iconic par-3, the 5th hole of the West, its green featuring a ferocious tilt and four bunkers carved into its edges, of which Greg Norman has said,”It’s the best natural green setting I have seen in golf.” (All the quotes in this story are from the official club history The Courses of the Royal Melbourne Golf Club by Michael Clayton.) There are nothing but devilish pin positions on this green, which will yield birdies to the boldest approaches and severely punish any lesser shot.

The memorable holes just keep coming, next up being a 426-yard par-4 with a nearly 90-degree dogleg to the right. Writes Clayton, a course designer in his own right, “If you ask any course architect to nominate a hole anywhere in the world that they would most like to have designed, the sixth on Royal Melbourne’s West Course would be high up on the list.” The hole will accommodate everything from an iron to a driver off the tee, depending on the wind and how much a player is willing to risk in the carry over sandy heathland. Awaiting is a particularly fraught green that Dr. Cary Middlecoff, after watching his partner Sam Snead putt off the green into the front bunker at the 1959 Canada Cup, called ”a great big bear trap which is set to grab you if make a false step.” Just ask International captain Ernie Els, who made an 8 here the day after shooting a course record 60 during the 2004 Heineken Classic. 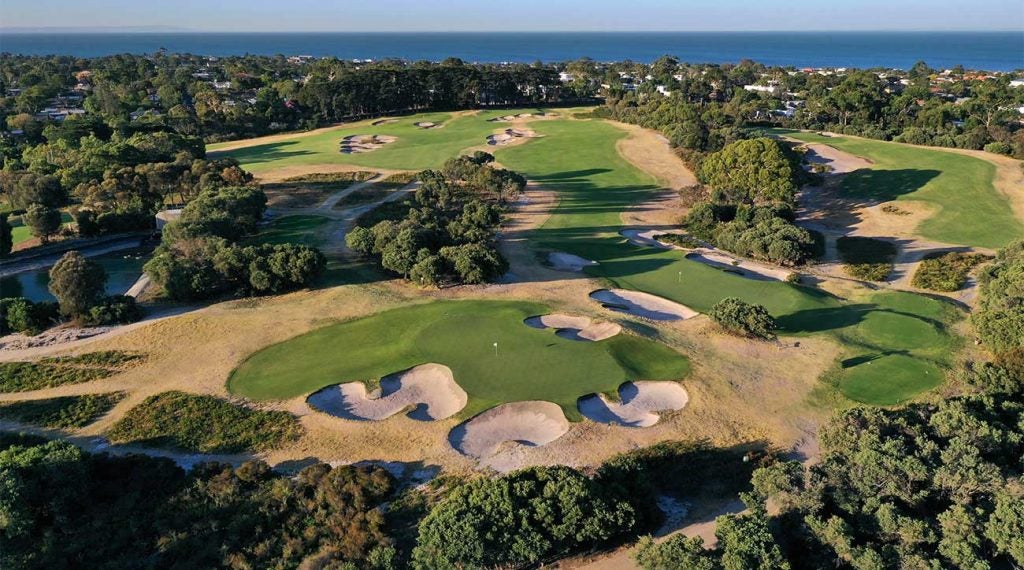 Royal Melbourne is one of many of Australia's glittering golf offerings.
Gary Lisbon

The sixth hole of the Composite (10 West) figures to be one of the defining stages of this Presidents Cup, an extremely dangerous, drivable par-4 of only 312 yards. Those who dare go for the green must navigate a gaping bunker short-left and a nasty waste area long-right. This hole, “messes with a good player’s mind,” says Norman. “You know you can knock it on the green but you can make an eight as quickly as you can blink.” Laying up is no picnic, either. “It’s a very intimidating shot from 70 meters,” says Norman. “There is no horizon, no backdrop.” Just the inevitably of bogey, or so it seems.

Now comes the meat of the Composite, four straight long, tough holes. (No. 8 is a par-5 on the scorecard but, at a mere 476 yards, will play as a two-shotter in the President Cup’s match play format.) The standout is the 9th hole (17 West), a par-4 of 439 yards and one of the finest examples of MacKenzie’s philosophy of strategic design. The hole doglegs sharply to the left, around an impenetrable thicket of bushes. Hugging the left side shortens the hole but introduces the possibility of a big number. A more cautious drive to the right-center of the fairway leaves a much, much tougher approach shot to a green that slopes right to left off two huge bunkers guarding the right edge of the putting surface. As MacKenzie himself put it,”It is true that in the best dogleg holes, the longer the player drives, the more direct his route, but nevertheless there is usually considerable risk with the accompanying thrill in going the straight line to the hole.” Ben Crenshaw cites this hole as one of his favorites, calling it “the essence of strategic architecture.”

The 11th hole of the Composite offers the first glimpse of the East Course, a come-hither par-4 of only 333 yards that features maybe the scariest green on the entire property. For the final round of the 1987 Australian Open, a hot wind from the north, plus a questionable pin position, led to a 5-putt, an 8-putt and a two-stroke penalty on Larry Nelson when his caddie marked the ball before it had stopped moving, to prevent it from rolling into the abyss. Things got so out-of-control the round was cancelled, the scores absolved and the players had to return the next day to finish the tournament. Such carnage at the Presidents Cup would be delicious fun. (Fingers crossed!)

The 16th hole of East Course didn’t become part of the Composite until the 2011 Presidents Cup. Before that, the 166-yard par-3 was the subject of lore: after Ben Crenshaw played a different Composite routing on his first trip to Royal Melbourne, in 1982, he was asked what he thought about the course. “I think I walked by the most most beautiful par-3 I have ever seen,” he said, referring to a green surrounded by seven MacKenzie-esque bunkers.. It now plays as the 14th hole of the Composite.

The ensuing par-5 (17 East, at 572 yards the longest on the property) has another expanse of celebrated sand, a trio of bunkers cutting diagonally across the fairway, 100 yards short of the green, complicating the calculus of going for the green in two. As the 15th hole in the Composite, this will be a critical swing in many matches. The finish will continue forcing players to weigh risk-reward. Nos. 16 and 17 are both medium-length par-4s that can be played in a variety of ways, while the closing hole (2 West) is a sharply doglegged par-5 of only 491 yards. There will be plenty of 3s and more than a few 6s on this icy green.

Royal Melbourne is so different from the bomb-and-gouge that has proliferated on the PGA Tour it should level the playing field for the crafty Internationals. Who is going to win the Presidents Cup? That remains to be seen, but there is zero doubt that glorious Royal Melbourne will be the star of the show.