U.S. Open sleepers to watch: Here’s who might break out at Winged Foot 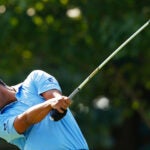 Sebastian Munoz hits a shot during the Tour Championship.

Paul Casey finished second at last month’s PGA Championship, two strokes behind Collin Morikawa. At various points, he was tied for the lead in the fourth round. He had a shot to win.

Oddsmakers gave him, essentially, no shot.

You won’t find Dustin Johnson, Jon Rahm or Justin Thomas low. But you will find potential value. You could find another Casey.

As the U.S. Open begins Thursday at Winged Foot Golf Club in New York, 12 members of our staff picked a player who was receiving +12,500 odds or higher to win on the Chirp Golf app, which is available in the App Store and at Google Play. This is the same group who has been making picks since the PGA Tour restarted in mid-June, and the U.S. Open selections can be found here. (Should the sleeper pick win, it will count toward that game.)

For this week’s Open, we have also created a free-to-play, play-money GOLF Magazine league on the new Chirp Golf gaming app (which is owned by GOLF.com’s parent company, 8AM Golf). To play, download the app, sign up and then enter the league here (or enter the code 024470 under the “join league option”). You will have $10,000 to spread around during the first round of the tournament, and you will receive an additional $5,000 each of the next three rounds.

The top finishers in the global league can win prizes such as a four-round experience at Cabot Links, or an hour-long lesson with George Gankas. The top three finishers in our league will receive gift certificates to our Pro Shop. It’s free to play. The money is play. The prizes are very real.

On to our staff’s sleepers.

Sleeper pick: Lee Westwood, +12,500. Got a taste of winning again earlier this year in Abu Dhabi and has been solid ever since. His deep resume of U.S. Open experience, including five top-10s, will serve him well.

Sleeper pick: Keegan Bradley, +15,000. The former major champion is a great ball striker and has the distance to win on a long U.S. Open track. The only question mark is his putter, but if it gets hot, he could legitimately contend.

Sleeper pick: Jason Kokrak, +15,000. I believe that the BMW offered a pretty strong preview of what’s to come, and Kokrak tied for sixth there.

Sleeper pick: Chez Reavie, +15,000. He finds fairways with the best of them, and that’s going to be important this week. Maybe not a pick-to-win sleeper, but a top 10 is certainly doable.

Sleeper pick: Chez Reavie, +15,000. Reavie’s best finish at a major championship just happened to be at last year’s U.S. Open, when he finished T3. Seems like the perfect sleeper this week.

Sleeper pick: Mackenzie Hughes, +17,500. Hughes had a quietly solid run to end the year and heads to Winged Foot in form. At those odds, this isn’t a terrible value.

Sleeper pick: Mackenzie Hughes, +17,500. Hughes is fresh off a stellar run in the playoffs, finishing in the Top 15 in all three events. I’ll take a hot hand at those odds.

Sleeper pick: Lanto Griffin, +20,000. If we’re picking a sleeper, we might as well pick one with a pair of top 20 finishes heading into the Open. I love me some Lanto.

Sleeper pick: Sebastian Munoz, +20,000. A win and five top-10 finishes in 2020 for Munoz, who has shown he plays tough setups well. Yet he remains under the radar, gambling-wise. At these odds, he’s more than worth a flyer.

Sleeper pick: Sebastian Munoz, +20,000. It’s a sleeper pick. Might as well take a guy who finished the season eighth in the FedEx Cup and closed with two T8 finishes.

Sleeper pick: Taylor Pendrith, +35,000. You want off the board? Let’s go off the board. Let’s check out Taylor Pendrith at 350-1. He went to Kent State (right after Julian Edelman), and a few years ago, when I last saw him play in person, he could hit the absolute cover off the ball (he still averages 323 on the Korn Ferry Tour, but I swear I saw him fly driver 360). Is he going to win? No. But he might make the cut, and maybe he’s worth a top-20 flier. But if he does win, I told you so!