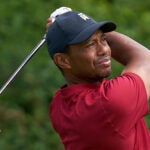 Tiger Woods hits a shot during the fourth round of the BMW Championship last month.

Tiger Woods hit his 8-foot putt at Winged Foot Golf Club, and it rolled right into the center of the cup. He looked up at someone in the distance and grinned. He then picked up his ball in the cup and walked away.

Woods began his Open week with a few hours of practice at the course in Mamaroneck, N.Y. A tweet from Golf Channel showed him hitting a drive on the 633-yard, par-5 12th hole. A tweet from GolfTV showed him hitting a shot on the range, two balls out of a trap on the range and the putt, which came on the practice green. An Instagram post from golf personality Ryan Rustand showed Woods hitting an iron into the 214-yard, par-3 10th hole and that he played that hole with Bryson DeChambeau. Golf Channel reported that he played nine holes in all.

Woods believed he had a Winged Foot warmup in his last tournament, too.

Olympia Fields Country Club’s length was long. Its rough was tall. Its scores were high. Two weeks ago, Woods shot rounds of 3-over 73, 5-over 75, 2-over 72 and 1-over 71 in Illinois to finish 11-over at the BMW Championship. He tied for 51st and failed to advance to the final leg of the season-ending playoffs.

“Yeah, this golf course was basically a U.S. Open, with the rough being as high as it is and fairways a little bit narrow,” Woods said after his final round. “Look at the scores, and I don’t think that we’ve seen scores like this in a non-major in a very long time. This was a great ramp-up for me for the U.S. Open. I wish I was playing next week, but I’ve got a couple weeks off.”

Sunday’s round was also not Woods’ first practice round at Winged Foot.

He and Justin Thomas played the course before the Northern Trust three weeks ago, according to a GolfTV tweet. In all, Woods has played four events since the PGA Tour resumed play in mid-June after its hiatus due to the coronavirus. He’s made the cut in all four. He’s also finished no better than a tie for 37th.

Woods knows he has work to do if he is to win a 16th major championship. If he’s to smile in a week.

“I would say trying to clean up my rounds and trying to miss the golf ball in the correct spots,” Woods said after the BMW. “As I said, I haven’t done that. It was nice playing a practice round and knowing what I have to deal with.”