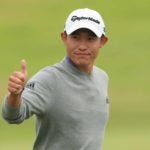 Collin Morikawa played the weekend at Harding Park in a major-championship-record 129 strokes.

SAN FRANCISCO — We deserved this. All of us. If 2020 has been an unrelenting grind of grim news, the final round of the 102nd PGA Championship was the perfect antidote — a giddy, nerve-jangling shootout that momentarily lifted the existential dread that has come to define the Covid era. There were no fans at Harding Park but the electricity of the final round pulsated throughout the golf world. Seven players were tied for the lead early in the back nine and you could barely breathe. “There was a lot of kind of whiplash,” said Jason Day, who was part of the gaggle. “Everything was coming and going.”

Then a star was born. Collin Morikawa, the first 23-year-old mature enough for the senior tour, fanned his approach shot into the 14th green, coming up 15 yards short with a 9-iron in his hand. It was a stunning miscue for the young Iron Byron…and then Morikawa holed the pitch for a birdie to pull one shot ahead of the pack. A few poignant cheers rang out for the erstwhile Cal Bear.

(Editor’s note: you can hear Alan break down the PGA Championship’s conclusion on the podcast below, or on Apple Podcasts here🙂

On the 294-yard par-4 16th, Morikawa decided to go for it for the first time all week. Fortune favors the bold — he smoked a drive that is already an instant classic, a butter-cut that rolled to within seven feet. “The shot on 16 looked like it was out of a video game,” said playing partner Cameron Champ. Morikawa drilled the eagle putt, a denouement that was stunning in its swiftness.

It was the most unwieldy major championship Sunday since the 2011 Masters, and the resounding way Morikawa closed the deal evoked Charl Schwartzel’s finishing kick nine years ago. How does one separate themselves from so many world-class players? “You had to be perfect,” Day said. Only Morikawa was; his bogeyless 64 tied the lowest final-round score ever by a PGA Championship winner, and his closing 36-hole total of 129 was the best weekend for a major winner ever.

Morikawa doesn’t have the flashy game of some of the players who were chasing him, nor does this soft-spoken, self-contained Southern California native chew up much scenery on social media or in the press room. What he has is an almost perfect swing and the golfing intellect of another player who came of age at a Bay Area Pac-12 school, Tiger Woods.

This was Morikawa’s 29th start on Tour; in Woods’s 29th, he won the 1997 Masters. No one expects Morikawa to reshape the game the way Tiger did, but he is clearly going to be a week-in-and-week-out force as long as he stays healthy and motivated. “When you start comparing him to somebody like Tiger Woods, you just know how special you have to be to even be in that conversation with Tiger,” Tony Finau said. “[Morikawa] is a heck of a player. He doesn’t have a weakness in his game. He doesn’t have a weakness mentally. So when you’re dealing with that type of talent, he’s going to be somebody to beat in major championships for a lot of these things.”

Going back to a glittery amateur career, Morikawa has long been a can’t-miss kid. He turned pro after winning the 2019 Pac-12 championship, part of the same heralded class as Matt Wolff and Viktor Hovland, both of whom received more attention, the former because of his wildly idiosyncratic swing, the latter due to an exuberant personality. But it turns out that Morikawa’s unflappable demeanor and fairways/greens game is tailor made for the grind of Tour life and tough setups like Harding Park. “I love his consistency,” Wolff says. “He’s missed just one cut [since turning pro]? It’s pretty unbelievable.”

In the end, it was Morikawa’s refusal to make a mistake that allowed him to prevail. Paul Casey, 43, put up the best fight, but he duffed his approach shot on 13 to make bogey just as Morikawa was spurting away. Casey now has the most starts in a major without a victory among active players (63).

Plenty of others were left to ponder the one that got away. After two early birdies to take the solo lead, Dustin Johnson spent the next nine holes playing prevent defense, making pars, not putts. (He had led the field in strokes gained: putting across the first three rounds.) Then on the 14th hole Johnson visited the rough and a greenside bunker en route to a deflating bogey. Johnson is now oh-fer-four converting 54-hole leads in the majors.

Bryson DeChambeau bashed his way to four birdies in the first seven holes to snag a share of the lead but immediately withered, bogeying 8 and 9 and then making a buzzkill par on the par-5 10th after a 359-yard drive. Day birdied four of the first 14 holes to roar into contention but on his way to the clubhouse couldn’t summon one more defining swing or putt.

Wolff, playing in the first major championship of his promising young career, was electric in the middle of the round, playing holes 7-10 in five under, and then birdieing two of the last three holes. Yet he is going to be thinking for a long time about the three-footer for par he missed on the 14th hole. Champ made two bogies and a double over the final 10 holes.

Finau had only one blemish on his scorecard but it came at the worst possible time, as he took three to get down from the fringe on the 12th hole.

So it was left to Morikawa to make all the history, including becoming the first man of Japanese and Chinese descent to win a major. (If the Olympics get played next year in Tokyo, and he is there representing the U.S., Morikawa has a chance to become a cross-cultural hero throughout all of Asia.) He is the third-youngest winner since the PGA Championship went to stroke play in 1958, behind fellas named Nicklaus and McIlroy. He becomes the first winner in the ShotLink era to lead a tournament in driving accuracy, approach shot proximity and strokes gained putting (per stats whiz Justin Ray).

“I’m on cloud nine right now,” Morikawa said Sunday evening. “It’s hard to think about what this championship means, and obviously it’s a major, and this is what guys go for, especially at the end of their career, and we’re just starting. So I think this is just a lot of confidence, a lot of momentum, and it just gives me a little taste of what’s to come. I got a taste of this now.”

At this PGA unlike any other, Morikawa concluded his round in front of maybe 200 on-lookers, many of them off-duty marshals and volunteers who tried their best to give the new champ the ovation he deserved. Morikawa smiled sheepishly and, with typical good manners, said thank you to those who called out in tribute.

And yet, despite appearances, Morikawa is not perfect. As he walked to the scoring area to make his victory official, girlfriend Katherine Zhu, who played golf at Pepperdine, went in for a hug. Morikawa gave her the Heisman, no doubt concerned about appearances in a world of social distancing. Then Morikawa reconsidered and pulled her in for a squeeze. “That was awkward,” said Zhu with a laugh. Of course it was. In 2020, nothing goes according to plan. But Morikawa’s rock-star performance? That’s the new normal.