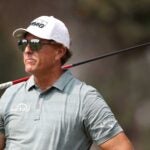 As long as Phil Mickelson has a tee time at the U.S. Open, his chase for the career grand slam will be a leading storyline.

The second major of 2020 for the best male golfers in the world kicks off this week at Winged Foot, where storylines abound. It’s the 120th U.S. Open and it’s going to get really good really soon. Here are the six best storylines entering the week in Mamaroneck, N.Y.

Even though he hasn’t gotten it done everywhere, no one has played as well as DJ has at U.S. Open setups throughout the years. Johnson won at Oakmont in memorable fashion, but he very well should have won at Shinnecock in 2018, Chambers Bay in 2015 and Pebble Beach in 2010. The guy has put himself in position to win many times. Can he add to the total?

Even though he hasn’t gotten it done anywhere, few players have played as consistently as Schauffele has at U.S. Open setups. Schauffele has T5, T6 and T3 finishes in his three career Open starts. Never worst than sixth is pretty darn great!

The oft-referenced Massacre at Winged Foot occurred many years ago but we could have a second-coming of the historic tournament this week. According to analyst Roger Maltbie, it is highly expected that the winning score could finish at over par. With a brutally long rough cut and incredibly tricky green complexes, Winged Foot is expected to stand up to the test of the best yet again.

With that in mind, it feels safe to bet on Jon Rahm’s chances. The 25-year-old Spaniard has risen to the occasion of difficult conditions each time the PGA Tour has been brutally tough this season. Rahm triumphed at The Memorial when he shot nine under to win by three, and then won in a playoff at the BMW Championship when four under was good enough to reach the extra holes. Rahm plays well just about everywhere, but there seems to be some advantage for him when the going gets tough.

As long as he has a tee time at the U.S. Open, Phil Mickelson will be one of the leading storylines filled with potential as he tries for the career grand slam. Mickelson has famously finished second at the Open on six different occasions, one of them in 2006 in painful fashion. Mickelson needed just a bogey to get into a playoff, he pushed his tee shot left and off a hospitality tent. He wound up making double bogey and gifted Geoff Ogilvy the championship. Could he possibly have some bit of magic left in the tank? He finished in the middle of the pack at 10 under at the Safeway Open last week before jetting across the country.

6. Rest all around (mostly)

This past weekend’s Safeway Open preceded a major championship for the first time, and as a result the field took a hit. Most of the best players in the world took last week off as they prepped for Winged Foot. Tiger Woods, Justin Thomas, Rory McIlroy, etc. No one will be able to claim a crazy schedule as an excuse this week. Everyone should be well rested and ready to rock.