U.S. Open picks to win: Here’s who our staff is betting on at Winged Foot 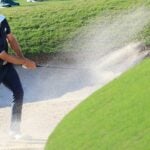 Dustin Johnson hits out of a trap during the Tour Championship.

If you can beat us, join us.

Twelve members of our staff have made three $100 bets – to win, top 10 and a prop bet of choice – in this space for each tournament starting with the Charles Schwab Challenge in mid-June. They have made those bets, below, for this week’s U.S. Open at Winged Foot Golf Club. We’ve wanted to help.

It now may hurt.

For this week’s Open, we have created a free-to-play, play-money GOLF Magazine league on the new Chirp Golf gaming app (which is owned by GOLF.com’s parent company, 8AM Golf). To play, download the app in either the App Store or at Google Play, sign up and then enter the league here (or enter the code 024470 under the “join league option”). You will have $10,000 to spread around during the first round of the tournament, and you will receive an additional $5,000 each of the next three rounds.

The top finishers in the global league can win prizes such as a four-round experience at Cabot Links, or an hour-long lesson with George Gankas. The top three finishers in our league will receive gift certificates to our Pro Shop. It’s free to play. The money is play. The prizes are very real.

If you can beat us, win with us.

On to this week’s picks.

To-win: Xander Schauffele, +1,400. Xander’s U.S. Open record speaks for itself: T5, T6, T3. It’s clear he plays hard golf courses well, and Winged Foot is about as hard as it gets.

Top 10: Martin Kaymer, +1,000. It’s been a while since Kaymer won his two majors. But he’s had a recent resurgence on the European Tour — T3 and runner-up in the past two weeks. I think he’s primed to give Winged Foot a run.

Prop: What score will the winner of the tournament shoot? Over par to 2-over, +500. Given Winged Foot’s history, this seems like a pretty safe bet.

To-win: Joaquin Niemann, +8,000. I believe that the BMW offered a pretty strong preview of what’s to come, and though, obviously, Dustin Johnson and Jon Rahm would be the picks then here, Niemann also contended – and his payout is much, much greater.

Prop: Which previous U.S. Open winner will have the best finish, Martin Kaymer, +800. He’s almost won his past two starts.

To-win: Webb Simpson, +2,000. Knows how to grind at a U.S. Open. This feels like a good week to take one of the most accurate guys in the field.

Top 10: Collin Morikawa, +200. Could see Morikawa winning his second straight major this week. Like Webb, he has all the tools to contend at Winged Foot.

Prop: Will a previous U.S. Open winner win the tournament? Yes, +650. Juicy odds when you consider I have DJ, Webb, Rory and Rosey in my stable of possible winners.

To-win: Jon Rahm, +1,100. Josh (below) makes a good point about Jon being the right man for the conditions, but consider this: Rahm ranked in the top 25 of just about every putting statistic on Tour in 2020 – and was even better down the stretch at Memorial and Olympia Fields. At a Winged Foot course that’s primed for a champion who can marry ball striking with savvy around the greens, Rahm is the right pick.

Top 10: Phil Mickelson, +750. Can he do it? Frankly, I’m less than convinced. But on the off-chance Phil actually is in contention heading into Sunday at Winged Foot, it wouldn’t hurt to add some financial incentive to my full-throated support for Lefty.

Prop: What score will the winner of the tournament shoot? Over par to 2-under. +500. +500 for a mortal lock? Seems pretty good to me. Seriously. Don’t make it any harder than it has to be.

To-win: Justin Rose, +3,300. Plays tough courses well and always seems to show up in the biggies.

Top 10: Brendan Todd, +800. It’s all about keeping it in the short grass this week, and few players do that better than Todd.

Prop: What score will the winner of the tournament shoot? Over par to 2-under. +500. If Winged Foot U.S. Open past is a prologue, no one will be going into the deep red this week.

To-win: Xander Schauffele, +1,400. “He’s due” is often said about Xander, and I’m saying it again. X is going to get the job done this week. A victory at Winged Foot solidifies Xander’s spot as one of the best golfers in the game.

Top 10: Gary Woodland, +750. Woodland’s famous stinger should keep him in the fairway and out of the rough this week. That should keep the defending champion in the mix all week.

Prop: What place will Tiger Woods finish? 21+, +700. If Tiger starts missing fairways, it’s easy to see the Winged Foot rough taking its toll on his body.

To-win: Dustin Johnson, +650. I’m not exactly going out on a limb with this pick, but as I’m watching him win again this week, I want to have him on my team. I’d feel like a fool betting anyone else right now given how well he’s playing. Winged Foot and Oakmont being the courses that he wins majors on would be perfect DJ, too.

Top 10: Daniel Berger, +300. He hasn’t won since the Charles Schwab, but Berger has been playing consistently great golf the past couple months. I expect him to notch a top 10 and possibly contend at some point on Sunday.

Prop: What place will Tiger Woods finish? 21+, +700. I have a feeling this is going to be a tough setup for Tiger, who tends to struggle finding the fairway off the tee when he’s not firing on all cylinders.

To-win: Jon Rahm, +1,100. Jon Rahm’s won twice in the past three months on courses that are about as close to U.S. Open setups that we’ve seen in Muirfield Village (second-hardest venue of 2020) and Olympia Fields (fourth-hardest), so he’s going to be my pick. The guy is a multi-major winner waiting to happen. He just needs to get the first one. That comes this Sunday.

Top 10: Justin Thomas, +163. I almost picked Rory. ’Cause I always pick Rory. But I didn’t pick Rory. So I picked Justin Thomas. If he can find a few more fairways than usual, he’s one of the best ball-strikers out there (first in strokes gained: approach) so he’ll be in good position to attack some of these flags — or at least as much as you can attack U.S. Open flags.

Prop: What place will Tiger Woods finish? 21+, +700. As much as I’d love to see Tiger jump into contention and add a jolt to the tournament, he hasn’t been at his best lately, and these odds are in my favor, if you ask me.

To-win: Xander Schauffele, +1,400. The man is due. He’s always near the top of the leaderboard in majors, and the U.S. Open has been among his most consistent, as he’s finished T5, T6, T3 in three tries. This is the week for Schauffele to finally break through.

Top 10: Adam Scott, +450. Though he hasn’t played a ton this year, he’s looked impressive in limited opportunities. Give me that sweet swing at Winged Foot every day of the week and twice on Sundays.

Prop: What place will Tiger Woods finish? 21+, +700. I simply don’t trust his health enough to believe he can grind through four rounds of carnage and post good scores. Sorry, Tiger fans.

To-win: Webb Simpson, +2,000. The former U.S. Open champ has the right mental tools to get it done at big, bad Winged Foot and has quietly been heating up with three top-15s in his last three starts. Two crucial stats also speak to Webb having a week: He led the Tour in 2019-20 in both bogey avoidance and putts per GIR.

Prop: Winning score: -3 to -6, +200. Lotsa big talk from Winged Foot insiders about about the field not breaking par. Don’t see it. No matter what the USGA throws at ’em, these guys are just too good.

To-win: Tommy Fleetwood, +4,000. Look, the heart wants what the heart wants. My gambling season has already gone down the drain — it’s time to root for Tommy (who’s heating up, by the way!) to get it done, even if he ends up finishing T2 behind Justin Thomas, which feels inevitable, for some reason. But we’ve already come this far. Fleetwood it is!

Top 10:  Martin Kaymer, +1,100. Maybe I just want to will this into existence? Who knows. But Kaymer is in solid form and seems to be swinging freely.

Prop: What place will Tiger Woods finish? 21+, +700. I hope I’m wrong, but these numbers are too valuable to avoid.