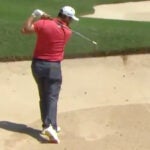 Jon Rahm's bunker shot sent his round (and his ball) in the wrong direction.

Sometimes, a single shot is enough to set a player backward. Less frequently, a single shot travels backward. On the 4th hole of Sunday’s Tour Championship final round, Jon Rahm’s bunker shot did both things.

It all started on the tee, when Rahm’s drive on the 474-yard par-4 went wayward, skittering into a fairway bunker some 180 yards from the hole. In itself, the bunker shot wasn’t an issue. Rahm had a clear look over the bunker and out toward the fairway ahead. More than likely, a simple iron shot would’ve left him with plenty of room to get up-and-down for par.

But there was a bit of an issue. Rahm, who entered the day at 13 under, couldn’t afford to take a par on the hole. If he was going to catch Dustin Johnson atop the leaderboard (and seven strokes ahead), Rahm needed to go for the green.

After a short discussion, Rahm and his caddie decided to go for it, which is where things quickly went awry. Rahm braced himself, took a hefty cut and sent his ball straight into the lip of the bunker. For a fraction of a second, Rahm’s ball disappeared, but then it bounced out and rolled back into the bunker some six inches behind his initial shot. Check it out for yourself below.

After the Mutombian rejection from the fairway bunker, Rahm had no choice. He took his medicine and hit a layup just shy of the green. A chip and two putts later, Rahm was in for double-bogey and his round back to even par for the day.

The lesson from Rahm’s brief shift from cruise control to reverse? When you’re hoping to catch fire, sometimes you just get burnt.