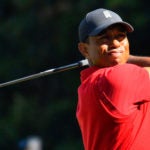 Tiger Woods hits a tee shot during the Genesis Invitational, the last tournament he has played.

Tiger Woods remains at sea. And he likely won’t dock for another month.

The 15-time major winner did not commit at Friday’s deadline to play in next week’s Travelers Championship, the PGA Tour’s third event after its three-month hiatus due to the coronavirus – and the seventh-straight tournament Woods has missed overall. Woods skipped the first tournament back, last week’s Charles Schwab Challenge, and the second, this week’s RBC Heritage, and he hasn’t played since he hosted the Genesis Invitational in mid-February.

He likely won’t play for another month.

The July 2-5 Rocket Mortgage Classic follows the Travelers. But, as the New York Post recently pointed out, Quicken Loans, the parent company of Rocket Mortgage, left as title sponsor to Woods’ tournament in Maryland after 2018, making Woods unlikely to play two weeks from now.

Two tournaments at Muirfield Village in Dublin, Ohio, follow. The first, the July 9-12 Workday Charity Open, replaces the recently canceled John Deere Classic, while the second, the July 16-19 Memorial, is scheduled to be the first tournament with fans since the first round of the Players Championship in mid-March. Woods has won that tournament five times and could return there – though he likely won’t play back-to-back weeks.

There had been speculation that Woods would play either the RBC, the Travelers or both.

Early last week, Woods’ yacht, Privacy, was reportedly on the move from Florida to Sea Island, Ga., which is a short cruise from Hilton Head, S.C., home of the RBC. The news set off rumors that he would make his return at the RBC, due to Woods’ tendency to bring his yacht to tournaments on the Eastern seaboard.

It’s unknown if the boat would travel north for the Travelers, in Connecticut. But Woods’ caddie Connecticut native Joe LaCava would, and that gave the tournament hope Woods would make his first appearance there.

While Woods has not played competitively, he’s been around courses.

In late May, he and partner Peyton Manning defeated Phil Mickelson and Tom Brady at The Match: Champions for Charity. Then this week, Woods’ TGR design firm and Pebble Beach released renderings of a par-3 course at Pebble designed by the 15-time major champion.

Woods may be missing the Travelers, but few others are.

Among those who have committed are world No. 1 Rory McIlroy, Jon Rahm, Brooks Koepka, Justin Thomas, Patrick Reed, Bryson DeChambeau and Phil Mickelson.

“It’s going to be the strongest field we’ve ever had,” Nathan Grube, the Travelers tournament director, recently told the Hartford Courant.