Why Brooks Koepka says announcers should ‘just shut up and listen’ 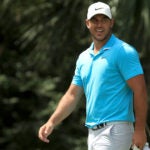 As the PGA Tour enters the second week of its fan-free return, viewers have been clamoring for more inside access to players on course. Last week, CBS’s Jim Nantz suggested that players were generally unwilling to be mic’d up, while Justin Thomas and Jordan Spieth said they’d rather not. Rickie Fowler was the lone player who was to be featured with a mic on the weekend, but he missed the cut.

But if you ask Brooks Koepka, the question of being mic’d up or not is irrelevant; he’s got a far simpler solution. After his opening round at the RBC Heritage, Koepka was asked if he had any thoughts on the mic’d-up debate.

“Yeah, I do,” he said. (When Koepka’s talking and says he has thoughts on a topic, that’s generally a good time to start paying attention.)

“I don’t understand why they want us to wear a mic when there’s a boom mic that stands ten feet away from every shot that I hit,” he said. “If the announcers would just shut up and listen, you could hear every word that we’re talking about. I don’t understand what the thing is.

“Half the time the lady’s holding a boom mic, and she’s listening to everything we’re saying all the way down. If they would just shut up, they could hear everything.”

The request for golf announcers to lay out is hardly a new one, but it’s notable coming from Koepka, a top-3 player in the world. The four-time major champ has continually enjoyed sparring with various media figures — particularly Brandel Chamblee — while becoming increasingly outspoken.

So does Koepka have a point? To an extent, yeah, he does. There are plenty of conversations we pick up via boom mic. Think back to the days of Tiger Woods and Steve Williams chatting about club selections, or Jordan Spieth planning out his hero shot on No. 13 at the 2018 Masters, or Patrick Reed taking on a camera crew at the 2018 Porsche European Open. Notable moments captured via boom mic. If a player is featured on PGA Tour Live, or he’s in contention on the weekend, or if his name is Tiger Woods, it’s likely there will be someone who could follow him with a boom mic. Most tee boxes feature boom mics, too, that can capture plenty of pre-shot chatter (though club selection is often done wordlessly, or at a whisper while other players are hitting).

Less is often more when it comes to golf announcing. Figures who have moved in and out of the golf world like Scott van Pelt and Joe Buck have noted how golf announcing is a unique challenge because you show so much and say so little. One should look no further than the collective reaction of the golf twittersphere when an announcer talks over what would have been an interesting conversation. It’s worth wondering if Koepka’s reaction came at all from his viewing of the matches leading up to the PGA Tour’s return, where plenty of announcer interjections felt like they were taking away from valuable player back-and-forth.

But if Koepka is suggesting the boom mics would replace all the benefits of a mic’d-up player, he’s missing the point. Camera and audio crews typically miss the in-between moments, which have plenty of intrigue. Those crews are often not quite close enough to capture full conversations. The Match II, for instance, was hailed as a massive entertainment success in large part because players were mic’d up the entire time. Phil Mickelson explaining chipping strategy to Tom Brady as he’s racing around a green would be tough to fully capture from a boom mic.

Of course, Koepka is well within his rights to object to wearing a mic for up to five hours a day, four days a week. That’s plenty understandable. But when he says announcers should “just shut up and listen,” he’s not addressing the entirety of a complex issue. He’s just not entirely wrong, either.