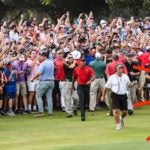 Earlier this month, we saw Tiger Woods make his public reappearance during what would have been Masters Week when Woods joined Jim Nantz on CBS. Now, Woods’ caddie Joe LaCava is back in the public eye on a different platform: the Country Club of Darien’s Instagram page.

These are strange times, where everyone’s home and everyone’s a media outlet. That certainly includes Darien’s head pro, Cory Muller, who was able to wrangle LaCava and coaxed some behind-the-scenes stories from some of golf’s greatest moments in recent memory. LaCava talked about the 12th hole at the 2019 Masters (and the 12th hole at the 1992 Masters!). He talked about the possibility of a fan-free return to the PGA Tour and of the prospects of a September U.S. Open and a November Masters.

What stuck out first and foremost to me was his description of the 2018 Tour Championship, Woods’ first win in five years and one of the most unforgettable scenes in sports. Here’s how LaCava remembers the moment walking up the 18th fairway:

Joe LaCava on the 2018 Tour Championship:

“Very, very cool and special moment. I tell people, you know, we always have Tour security with us. And then at each tournament we have the local cops, or retired guys or FBI guys, some guys on the job, some guys not. So I get to know those guys. Because when I go to a tournament, I usually meet Tiger in the parking lot and the cops are always there early. So I hang out with these guys. So it becomes kind of friendly with them. They share stories, I share stories.

“In that particular year, after Tiger teed off on 18, the 72nd hole, we tee off and I can sense a couple of people kind of coming under the ropes behind me, but not thinking much about it. And then I’m kind of the furthest behind after Tiger hits his second shot into the green. And now once he’s hit in that bunker with a couple-shot lead, we know he’s going to win the tournament, but it’s not done. And more and more people kind of come under the ropes, and I can sense that.

“And so as I’m walking down the fairway, the cops are walking towards the green also, but backwards, kind of just making sure everything’s okay. And they looked at me like, ‘What do you think?’ As if to say, you know, ‘Is Tiger going to be okay with this?’ I don’t think they could have done much at that point, there’s only a couple of them. And at that point, it was a couple hundred people coming under the ropes. And I said, ‘Eh, why not, let ’em under the ropes, it’ll be fun, we’ll have a great time with that.’ You know what I mean? Just be cool.”

“And then, next thing I know, you know, it went from, you know, 20 to 50 to 200 to a couple thousand. And then Tiger looked back because, you know, when he’s gonna win a tournament, I try to kind of stay back a little bit. And he’s looking back at me and I’m, y’know, 25 years behind him, he goes, ‘What are you doing?’

“I says, I’m going to the green like you are,’ like, what do you think I’m doing?

He goes, ‘You better get your butt up here.’ It’s getting kind of crazy and dangerous and stuff. So then I kind of sensed it. And I look behind me and now it was getting crazy. Now they’re all passing me. So I kind of hustle up with the bag. My first thought is, ‘Don’t trip and fall. A. You’ll embarrass yourself and number two maybe someday will break the putter and we can’t finish this tournament off if they step on the clubs.’

“So I hustle up, get up in front. And it was really, really cool. I mean, it was one of the best moments for me and I think Tiger really loved it, too. You know, it can be a little bit dangerous, but it worked out great. Everyone was fine. It was a blast.”

Here were some of my favorite moments from the rest of the LaCava interview:

On Tiger playing No. 12 en route to winning the Masters:

“Y’know, we’re coming down at 11 and usually what I do is Thursday through Sunday, once my guy hits it on 11, I’m all about the 12th hole. If he calls me to read the putt on 11, I’m gonna be ready. But if not, I’m concentrating on 12 and checking out what’s going on over there and trying to get an early sense of the wind over there because it can be pretty tricky. But I didn’t feel that much wind in 2019, when Tiger won, when we’re coming down 11.

“But I look over there and I see Poulter and Brooks dropping and I see Webb Simpson over the green. And I’m thinking to myself that you’ve got three world- class players. Brooks is playing better than anybody. Something funny must be going on up there. They’re not mis-clubbing. And Brooks Koepka doesn’t mis-hit many shots. So I think that actually helped us when we got to the 12th tee, and I sensed Tiger looking over there as well. I knew he was taking a peek.”

(After Molinari hits his tee shot in the water):

“It’s tough to get up there and hit a shot knowing the guy in front of you just hit one more club and hit it short in the water. But Tiger, to his credit, we didn’t have much conversation after that. And I just basically said to him just hit a solid 9-iron left-center and he said, ‘You got it.’

“He’s always told me — and so has Fred — that the key to that hole, they feel like, is just commit to what you’re hitting and make sure you hit it solid, more than anything. I don’t think, at the time anyways, we were thinking we had to hit it that hard. And so we saw Molinari come up short and we saw Brooks in front of us come up short. We figured Brooks had a 9-iron. So it helped seeing all that.

“And what happened was Tiger went hit it really solid. I mean, he always hits it solid but he hit it really hard and he hit it basically probably 10 feet left of where he was looking. And then as the ball’s up in the air, we notice it kind of getting knocked down a little bit and moving a little bit left, even though you don’t feel that breeze on the tee. So that’s, I think, what happened to the other guys. They took it on a line a little further right, they didn’t realize that wind was up there and it was coming from right to left and knocking them all down.

“So had we gone first on the hole, it might have been a different story, but it worked out very well.”

On Fred Couples’ ball hanging up on the bank on No. 12:

“We get up to the green and, I’m up on the green, probably 15 feet from the ball. And he says to me, y’know, ‘What are you doing? I need my lob wedge!’ And I said, ‘Well, yeah, you need your lob wedge, I know that. But you gotta come up here and get it.’ I said, ‘My 210 pounds is going to make that ball go back into the creek. I’m not going anywhere near that golf ball. That was hanging on a thread, basically.

“But we got a break. The day before was a bunch of storms and we didn’t actually finish Saturday’s round until Sunday morning. So much rain, the storms were that bad. So we got a break in the fact that I don’t think they mowed the bank that morning, and it was very, very soft. And then, like I tell people, I said, yeah, it was a break. But at the same time, [the chip] is an easy shot to hit the week after the Masters, a week before the Masters, a practice round. But considering the circumstances, it’s not that easy a chip. And, you know, Fred hit it like this [holds up arms], which was awesome, made a basic 3 and then went on to win. Great hole, it’s been good to us. So I’ve got no complaints there.”

On the possibility of playing without fans:

“It’ll be different for sure, obviously. And you made a good point, I worked for Fred in his heyday, when he had the biggest crowds. And now, working for Tiger, obviously he has the biggest crowds as well. So I love that. I mean, I love the people cheering him on. And I feed off that energy and I think Tiger does, too, and I think Fred did as well.

“But having said all that, it’ll be different. I think it’ll be, you know, they’re talking about the Ryder Cup possibly without crowds. I think that’ll be tough because that’s kind of what makes that tournament. But I think the guys at this point, after being off for three or four months or whatever it’s going to be, they’ll be happy to play without anyone around, just to get out and play and be competitive again.

“So it’ll be strange for us because like I said, Tiger has the biggest crowd … but we can do without crowds for the first few weeks. I think that’s fine.”

On a Fall Masters:

“As far as Augusta goes, when I worked for Fred, for some reason, he went there one time in the fall. And I remember him telling me how tough it played, how long it played. Because I think it had been raining, cold, you know, icy cold, 40s and rain. So I think potentially if they get that kind of weather, obviously it’ll play much longer, even though they have the sub-air. I just think Mother Nature that time of year will make it play a lot longer. Which again, I think Tiger’s got the length, so if that is the case, we’ll be fine. Again, I’d rather play a little firmer and faster, because I think that’s to our advantage. But regardless, we’re playing in November. I’m just happy they’re getting it in. And it’ll be great to have that No. 1 on your bib, meaning defending champ.

“It certainly won’t be the same without the stuff blooming and all that. But I think they’ll still it set up where it’s going to look great and be a lot of fun.”

You can check out the entire interview below.