Tiger Woods’ yacht is on the move. Here’s why that *might* hint at where he’s playing next 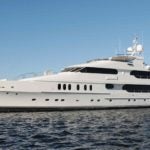 Tiger Woods is not in the field for this week’s Charles Schwab Challenge at Colonial in Fort Worth, Texas, and at this point we don’t know when we’ll see the 15-time major winner next.

But we now may have a hint. Or at least something fun to speculate on.

Woods’ yacht, Privacy, left its Palm Beach port on Tuesday morning and is bound for St. Simons Island, Ga., according to MarineTraffic.com. The yacht’s movement was first reported by Riggs at Barstool Sports. It’s notable because next week’s RBC Heritage at Harbor Town is on Hilton Head Island, a two-hour drive north of St. Simons Island, or another quick yacht cruise up the coast. Docking on St. Simons Island could be a pit stop — or nothing at all.

Woods’ agent, Mark Steinberg, has not immediately responded to GOLF.com’s request for comment regarding Woods’ next planned start. The RBC Heritage’s tournament director, Steve Wilmot, told GOLF.com, “Sorry to say we have not heard one way or another if he is planning to play.”

Despite Woods’ yacht leaving its dock, it’s unlikely he’s on board. In the past, Woods has sent Privacy near tournament locations, then flown in later, usually staying on the boat during the week. He last did this at the 2018 U.S. Open at Shinnecock Hills and the 2019 PGA Championship at Bethpage Black, both of which were on Long Island.

Usually, the RBC Heritage is not a tournament Woods would consider entering. He’s played it just once, back in 1999 when it was the MCI Classic (he tied for 18th). It’s also often the week after the Masters, which never works well for Woods’ scheduling. But things are different this year after the PGA Tour’s 12-week pause due to the coronavirus. Suddenly tournaments that didn’t always bring in big names are loaded. Colonial has 101 Tour winners in the field and, for the first time in the OWGR era, the top-five players in the world. Even Rory McIlroy, who has played Harbour Town just once before, is teeing it up there next week.

Will we see Woods at Harbour Town, or is this yacht cruise unrelated to his next start? We’ll have to wait to find out.