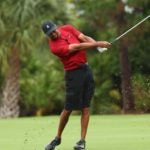 Tiger Woods was dialed in for The Match II.

The Match II was glorious anarchy, a beautiful train wreck that offered the mindless entertainment a wary nation desperately needs. But amid all the televised yukking and wilding-out on Twitter there was one very momentous development: Tiger Woods is back, baby.

When professional golf came to a grinding halt in mid-March due to the coronavirus, Woods was battling both his swing and his body. With the Masters bearing down on him Tiger was serially avoiding tournament golf, trying to buy time. The halting of the season couldn’t have come at a better moment for a 44-year-old warrior with a fused spine. The Match, then, was the first glimpse of Woods in 98 days and midway through the front nine Phil Mickelson blurted out the verdict: “He’s striping it.”

Tiger’s swing was rhythmic and graceful, the telltale transition at the top as languid as a humid afternoon in South Florida. Over the first eight holes — by which time Woods had staked himself and his partner Peyton Manning to a 3-up lead — the only shot Tiger missed was when he had to putt with his 4-iron, part of a gimmicky one-club challenge.

On the 9th hole, a long, tough par-4 into the fan, Woods’s long-iron approach was tracking toward the hole when he shouted out a vintage plea: “One more yard!” He didn’t get it — the ball expired in a bunker from which Woods saved par with a gorgeous recovery shot — but that level of specificity was a sign of how locked-in Tiger felt. Yes, this was a hit-and-giggle exhibition (for a great cause!) on his home course, but Woods’s play was a far cry from when we last saw him on Tour, wincing through closing rounds of 73-76-77 at the L.A. Open.

By the 17th hole, on-course commentator Justin Thomas was moved to say, with a touch of wonderment, “He’s a fairway-hitting machine!”

Watching Tiger pluck his tee from the turf before his drive had even reached its apex and then shape iron shots into the well-fortified greens was a vivid reminder of what has been taken from us. But his fine play suddenly makes the rest of the PGA Tour schedule that much more intriguing. It remains to be seen how much Tiger will want to endure the hassles of the new Covid protocols to play in everyday Tour events but one thing is now clear: barring a setback with his back, Woods has restored himself as one of the favorites when the big events begin with the PGA Championship, now scheduled for early August.

Made in partnership with GOLF.com, this 3-pack of masks features new designs for golf enthusiasts. Proceeds go to the Golf Emergency Relief Fund, providing short-term financial assistance to those facing hardship due to COVID-19.
Buy Now

In ranking the winners of this Match, the list would have to include Phil Mickelson’s wedge play and general showmanship, Tom Brady’s good cheer and unlikely hole-out that melted the Internet, Manning’s low-key charm and reliable draw and, of course, the four national charities that will split the $20 million generated by this zaniness.

But by far the biggest winners were golf fans who on Sunday got to enjoy five hours of levity and, more important, a peek at vintage Tiger. Seeing Woods in full flight made sheltering-in-place slightly less onerous for one blissful afternoon-turned-evening and gives all of us that most precious of commodities: hope for the future.