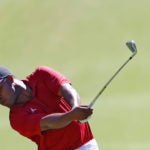 Harold Varner hits a shot on the 18th hole at Colonial Country Club.

The first competitive round in three months due to the coronavirus hiatus was played. No fans. A co-leader with no doubt more on his mind than golf. A moment of silence.

The PGA Tour resumed on Thursday with the first round of the Charles Schwab Challenge at Colonial Country Club in Fort Worth, Texas. Here are three things you may have missed.

Last week, Harold Varner, one of the few black players on Tour, shared a letter on his social media feeds in the midst of the social unrest following the death of George Floyd in police custody on Memorial Day. He then shot a video with Tour commissioner Jay Monahan entitled “An open and thoughtful conversation.” On Thursday, he went out and fired one of the best rounds of his life.

Varner started with birdies on his first two holes and never made a bogey on his way to a 7-under 63, giving him a share of the first-round lead with Justin Rose. Varner hit all 18 greens in regulation, only the second time he’s done that in his career, and the first time that’s happened at Colonial in 10 years.

Rose, for a while, was on 59 watch. As part of one of the featured groupings with Bryson DeChambeau and Dustin Johnson, Rose shot 4-under for his front nine, then started his back nine with three birdies. He closed with six straight pars to give him a 63.

Varner and Rose lead by one shot over four players – Jhonattan Vegas, Abraham Ancer, Collin Morikawa and Justin Thomas – and by two shots over nine players.

As the first tournament on the calendar since March, the Charles Schwab Challenge drew an elite field – 16 of the world’s top 20 teed off Thursday – and the leaderboard did not disappoint in terms of star power.

Thomas was in the group of players one shot behind the leaders. DeChambeau and Jordan Spieth each shot 5-under 65s. World No. 1 Rory McIlory, Patrick Reed, Brooks Koepka and Jon Rahm were in a large group of players at 2-under.

Phil Mickelson, one of the players in The Match: Champions for Charity, a few weeks back, shot a 1-under 69.

Ryan Palmer, a member at Colonial, teed off first, the first shot struck on Tour since the first round of the Players Championship in mid-March. Palmer’s tee shot wasn’t witnessed by any fans, one of the safety measures the Tour enacted in its return to play.

At 8:46 a.m. local time, just under two hours in, the Tour observed a moment of silence to honor the work to end racial and social injustice in the country, the time recognizing how long George Floyd was pinned to the ground by former Minneapolis police officer Derek Chauvin, before dying on Memorial Day. The 8:46 a.m. tee time was also kept open, and the 65 golfers on the course and others at the Charles Schwab Challenge came to a stop. The moment of silence will be observed for all four rounds.