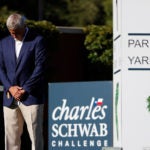 PGA Tour Commissioner observes a moment of silence at 8:46 a.m. local time in Fort Worth, Texas.

It stopped for one minute just under two hours in.

The Tour observed a moment of silence at 8:46 a.m. local time in Fort Worth, Texas, to honor the work to end racial and social injustice in the country, the time recognizing how long George Floyd was pinned to the ground by former Minneapolis police officer Derek Chauvin before dying on Memorial Day. The 8:46 a.m. tee time was also kept open, and the 65 golfers on the course and others at the Charles Schwab Challenge came to a stop.

“As the PGA Tour commits to amplifying the voices and efforts to end systemic issues of social and racial injustices, we have reserved the 8:46 tee time to pause for a moment of silence, prayer and reflection. Thank you,” PGA Tour commissioner Jay Monahan said on the first tee at Colonial Country Club.

Three air horns were then blasted, and play stopped.

Players took off their hats and lowered their heads. Various officials near the 10th hole did the same. Monahan remained on the first hole and lowered his head.

The tee time will be open all four rounds of the tournament.

The gesture follows a letter that Monahan sent to players last week entitled “a time to communicate and search for answers,” and a video with Monahan and Harold Varner, one of the few black players on Tour, labeled “an open and thoughtful conversation.”

In the weekend after Floyd’s death, Monahan said in the video he called “my black colleagues, my black friends, people who I thought I could really learn from.” He said he didn’t understand what the solution would be in the short term. He said he would start by listening.

Monahan then relayed what he heard.

“We had our team meeting first thing Monday morning, as we do every single day, and I said, ‘Listen, guys, as your leader, I’ve had a couple of sleepless nights here and I don’t have the answer here,’” Monahan said. “‘But as an organization, as we have been for a long period of time, we’re committed to diversity and inclusion and we’re committed to doing what’s right. And what has happened here is not right. And we are going to be a part of the solution. And let’s open up our discussion, let’s make certain we are listening to our players, let’s listen to our colleagues and let’s do this the right way.’”