WATCH: Dustin Johnson hilariously forgets he doesn’t have a caddie 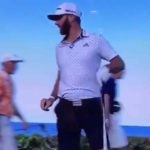 Dustin Johnson paced after his tee shot before retreating for his bag.

When you’re as skilled at golf as Dustin Johnson, you grow accustomed to things most golfers never will. From invites to super-elite golf clubs to truckloads of comped gear, the life of a professional golfer (in addition to the whole “getting paid to play golf” thing) ain’t bad.

But there’s one element of the professional golf landscape that is both luxury and necessity: caddies. Their job is all-encompassing. They are a player’s coach, friend, motivator, teacher, partner, and, of course, bag carrier.

In Sunday’s TaylorMade Driving Relief skins game, Dustin Johnson was reintroduced to life without a looper. All four players (Johnson, Rory McIlroy, Rickie Fowler and Matthew Wolff) carried their own bags for the duration of the match in an effort to promote safe social distancing.

For the first 17 holes, Johnson’s foray into the caddie-free zone went swimmingly. He comfortably lugged his TaylorMade carry bag and seemed (spare for his water-bound tee shot on No. 15) his usual self.

Then, on the 18th tee, DJ got a little too comfortable. He stepped up to the tee, bombed his tee shot, and — like he has for the entirety of his career — began to follow it down the fairway. The only problem? He’d forgotten his bag.

The scene lasted no more than two seconds, but NBC cameras captured the delightful moment of humanity from the world’s No. 5 player.

Johnson would have the last laugh. His par on the 18th halved the hole with Fowler and Wolff, and sent the match to a sudden-death playoff. Four swings later, Rory McIlroy (Johnson’s teammate) knocked his approach on No. 17 to a dozen feet, winning the closest-to-the-pin challenge and the match for team McIlroy-Johnson.

In the end, Johnson emerged victorious, sporting a $5 million donation to charity and a healthy new appreciation for his caddie (and brother) Austin’s right shoulder.