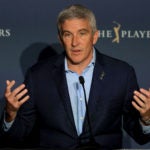 PGA Tour Commissioner Jay Monahan said in a video that the Tour is "going to be a part of the solution."

Golf has been trying “really, really hard” to diversify.

The PGA Tour commissioner said Friday that it hasn’t been enough.

“Our sport has been in a relatively stable position for a long period of time not growing,” Jay Monahan said on a video with Harold Varner, one of just a few black players on Tour.

“We need to grow out of this, and we need to diversify those that have access to our sport and make sure we’re making a difference there.”

The video, labeled by the Tour as an “open and thoughtful conversation” between Monahan and Varner, and a letter also released Friday, entitled “a time to communicate and search for answers,” were Monahan’s first public statements following the social unrest after George Floyd’s death in police custody on Memorial Day. The video and letter follow Varner’s 632-word statement on social media on Monday that called for unity.

Toward the end of the just over 11-minute video, Varner asked Monahan if the sport of golf had not previously tried to diversify itself.

“That’s where I struggle,” Varner said. “I think it’s just really damn hard. Because if it was so easy, why wouldn’t we do it?”

Monahan used as an example the First Tee program. The organization promotes the game to youth. Then golf doesn’t follow up.

“We haven’t necessarily or fully solved the continued access to the game as they get into the high school, college and professional world and/or jobs in the golf industry,” Monahan said.

Earlier in the video, Monahan asked Varner what he would like to see the PGA Tour do.

Varner said there are more black people involved in the organization than just the players. They should be heard, too.

In the weekend after Floyd’s death, Monahan said he called “my black colleagues, my black friends, people who I thought I could really learn from.” He said he didn’t understand what the solution would be in the short term. He said he would start by listening.

Monahan then relayed what he heard.

“We had our team meeting first thing Monday morning, as we do every single day, and I said, ‘Listen, guys, as your leader, I’ve had a couple of sleepless nights here and I don’t have the answer here,’” Monahan said. “‘But as an organization, as we have been for a long period of time, we’re committed to diversity and inclusion and we’re committed to doing what’s right. And what has happened here is not right. And we are going to be a part of the solution. And let’s open up our discussion, let’s make certain we are listening to our players, let’s listen to our colleagues and let’s do this the right way.’”